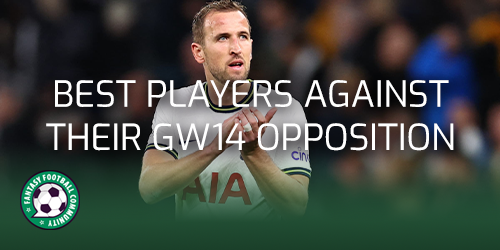 We take a look at some of the best players against their Gameweek 14 opposition. Using previous head-to-head records and underlying stats from the Fantasy Football Scout members area to help us pick out some great FPL picks for the round ahead.

Picking out the best players against their Gameweek 14 opposition could be helpful in making both transfer and captaincy decisions. The more information FPL managers have the better our decisions tend to be in terms of having successful assets in our fantasy teams.

Tottenham Striker Harry Kane (£11.5m) has been one of the most consistent assets in the game this season. In fact, the forward is currently sitting as the second highest point scorer in FPL. His relentless form has seen him return in 10 of the 12 matches he has played.

Kane faces Bournemouth in Gameweek 14. We can see he has an excellent FPL record against newly promoted teams. In the 18 most recent matches Kane has played against promoted sides, he has returned in 14 of them. Those points consist of 14 goals and three assists.

Staying with Tottenham v Bournemouth, Son Heung-Min (£11.7m) could be another great asset in Gameweek 14. Son has failed to meet many FPL managers expectations this season. In fact, the attacker has managed just three returns in his 12 matches played.

We can see below how strong Son is against newly promoted sides. In the latest 21 matches he has played against them he has returned in a massive 15 of them. Those returns consist of 11 goals and eight assists.

Mohamed Salah (£12.8m) is another player that has not been meeting the expectations of FPL managers. The Egyptian has returned in just five of his first 11 matches. This could be seen as a far cry away from his attacking output in recent seasons.

Salah does face Leeds in Gameweek 14. We can see that Salah has now racked up three returns in his last four matches against Leeds. Those points include two seismic double-digit hauls of 20 points and 18 points.

Man United are coming into a run of good fixtures. This run could see some FPL managers interested in Man United investment. However, Marcus Rashford (£6.6m) has been disappointing this season. The winger has claimed just three returns from his first 11 matches played.

Although that is the case, Rashford’s record against West Ham is very good. In the 12 matches he has played against the Hammers, Rashford has returned in half of them. With those great fixtures coming could we see managers take a risk with the attacker?

Leicester midfielder James Maddison (£8.2m) has been hit and miss this season. However, he has also shown in the past he can return against some of the best teams in the league. So far this season, Maddison has picked up six returns in his 10 matches played.

Finding players who have any sort of success against Man City is difficult. However, we can see below that Maddison has had some. In the last four matches against Man City, the midfielder has come away with two double-digit hauls.

What do we expect from Gameweek 14? You can check out our article covering exactly that here.