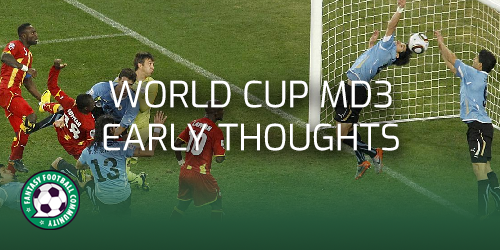 A collection of early World Cup Fantasy thoughts for Matchday 3, which begins on Tuesday and lasts until next Friday.

Maintaining the rate of four games per day, the third set of matches takes place over fewer time slots. As each group’s final two matches must be simultaneous, it’s the only part of this World Cup where multiple matches will take place at once.

The standout narrative is surely Ghana versus Luis Suarez ($7.5m) and Uruguay, in a rematch of their dramatic 2010 quarter-final. Additionally, there is Croatia v Belgium and a British battle between Wales and England.

With that in mind, the below thoughts are given three days in advance.

Immediately, the Holland assets look tempting against hosts Qatar. Rotation shouldn’t impact decisions here, as the team sheet gets released pre-deadline and can be reacted to accordingly. Memphis Depay ($8.5m), Cody Gakpo ($7.0m), Denzel Dumfries ($6.0m) and Steven Bergwijn ($7.0m) could all be strong captains if they start.

Meanwhile, Costa Rica joins Qatar in being the standout worst team of Matchday 1. Germany could be eliminated by this point but Jamal Musiala ($8.0m) may still be given the chance to dominate here.

Not only will Wales be highly motivated to beat England but the Three Lions will probably rotate. Therefore, it’s hard to call who’d be a good Fantasy pick and it’s similar for Brazil should they beat Switzerland in Matchday 2. If we can guess who starts for them versus Cameroon, that would be highly beneficial.

Elsewhere, Mexico are hard to call for Saudi Arabia but other players like Andreas Skov Olsen ($6.0m) and Cristiano Ronaldo ($10.0m) are worth consideration.

So, let’s enjoy Matchday 3 and grab some Fantasy points!