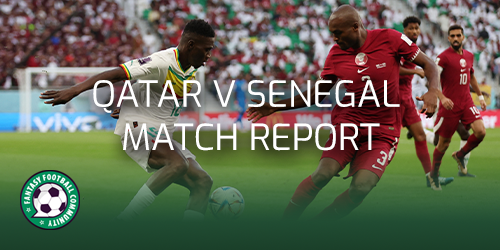 The World Cup continues. Our first Group A match of the second round begins today. We take a look at the Qatar v Senegal match. We will highlight the line-ups, pick out the key moments and standout World Cup Fantasy performances during the match.

Akram Afif (£4.5m) and Almoez Ali (£4.5m) will be hoping to fire the hosts to their first win of the tournament after slumping to a 2-0 defeat against Ecuador. Neither player managed a shot on target during their first match.

Many managers within the community have backed defender Youssouf Sabaly (£4m). Sabaly impressed during their 2-0 defeat to Netherlands. Another favourite could be Ismailla Sarr (£6.5m). The forward looked like Senegal’s most dangerous player in Matchday 1.

Senegal did worry me for parts of the game. Their lack of effort when they were winning was a huge factor as to why they conceded, which in turn decreases the appeal of their defensive assets. Another disappointment was Ismaila Sarr. Sarr failed to pass the eye test during the match, and he is a concern moving forward.

Be sure to stay up to date with all of our World Cup Fantasy articles right here.