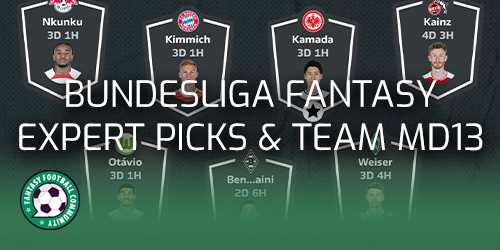 With a new round ahead, we look at Bundesliga Fantasy Matchday 13 expert picks and team. @FPLGunnersaurus (Jay) joins us to give his three top picks for the Matchday ahead. In addition, he also shares his squad going into the new round with his general thoughts.

Twitter is full of the most experienced fantasy football players around. Those managers can be some of the best people to look to when trying to gain clarity when making their own decisions within their teams. Seeing Matchday 13 expert picks can help for the round ahead.

To make it clear this is not a recommendation over the red-hot Niclas Füllkrug. It’s to potentially double up on the Bremen front-line this weekend. Why you ask? It’s operation target Schalke time again! The rot at Schalke shows no signs of stopping. There has been no new manager bounce and the Bundesliga’s bottom side have now lost six league games in a row. Meanwhile, after a few off games, Bremen returned to form with 1-0 home win over Hertha Berlin.

Another home game beckons for Bremen and in the Saturday evening kick-off, Ducksch could go crazy. Ducksch, only 2% owned, is the 9th best forward in Bundesliga Fantasy. Despite only scoring twice and assisting thrice Ducksch has racked up a whopping 32 points for goal attempts. In addition, he has also notched 20 points for passes to a shot, more points combined than Fullkrug’s overall return for those same actions. Bremen could go wild here and dine like kings for their Saturday supper. Bring in at least one Bremen forward if you don’t currently own one or go without at your own peril!

A past standout Bundesliga Fantasy star, Lars Stindl shines as one of the best midfield options for Matchday 13. Overtaken in popularity (and in fantasy returns) in recent years by Jonas Hoffman, the Gladbach skipper is certainly capable of a haul in a home tie against 15th place Stuttgart. In three of the last six matchdays, Stindl has returned double digits in Bundesliga Fantasy, one of which saw him return 18 points in a 3-0 home win over RB Leipzig.

Gladbach play in the first game of the matchday on Friday night. So, if Stindl doesn’t live up to the hype he can always be taken out. That said however, there’s absolutely no harm in making him your first star midfielder option. If he repeats a performance, we all know he’s capable of, managers could be starting Matchday 13 on an extremely high note.

Raphaël Guerreiro’s popularity has significantly waned this season in Bundesliga Fantasy. As can be seen with only 4% of managers having him in their squads. That, however, should not put anyone off bringing the Portuguese international in for Matchday 13. With a great fixture at home to second bottom side Bochum. This of course pending, he can overcome a muscular issue that caused him to miss their win over Eintracht Frankfurt.

Coach Edin Terzic is confident; however, he will be available for selection for their next league game and Guerreiro could make for a fantastic differential. He reminded everyone what he’s capable of in Dortmund’s 5-0 home win over Stuttgart on Matchday 11. He has amassed a whopping 21 points which saw him supply two assists. Bochum have the worst expected goals against in the league, at 2.3xGA, so on paper this tie looks like it could be all one-way traffic. Keep an eye on the pressers and if confirmed fit race to get Raph in your squads.

Keep up to date with our Fantasy Bundesliga content right here.