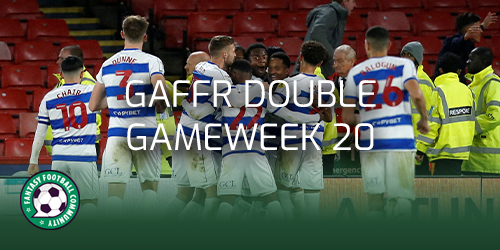 We look at the GAFFR double Gameweek 20. Picking out the chips available to use, the teams that have a double Gameweek and some of the best assets in the game to target. We try to cover all of the key factors to get you prepared for the double Gameweek.

Double Gameweeks can be one of the most important periods in any season. Managers will do well to know which teams are doubling, what chips are available and who some of the key targets are ahead of the Gameweek. This way we can prepare.

Which teams have double Gameweeks?

It is absolutely key to understand which teams are doubling in the round ahead. That way we can target those teams for investment. The teams that have a double in Gameweek 20 are:

Which teams have the standout fixtures?

Who are worth investing in?

What chips are available to use?

This is a list of chips that have been made available by GAFFR after Gameweek 15, but some may have been used in the lead up to Gameweek 20. Let’s take a look.

You can stay up to date with all of our latest GAFFR articles here.