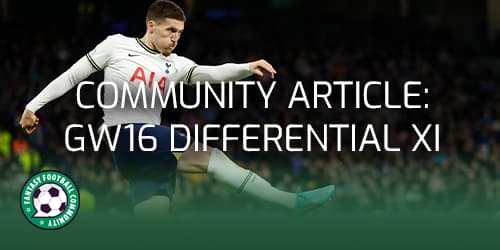 We’ve all seen the “template XI” and will, no doubt, have figured out which elite assets we’re going to jump on this season.

Whether you’re on the Salah train or the Haaland bus (or both), you’re going to be needing some handy differentials in your side to ensure you’re always one step ahead of your mini-league rivals and can climb up those world rankings!

In this weekly series, we explore those low ownership options that could be the hidden gems to help you to creap up that table. Here are the best differentials for Gameweek 6 that we like the look of.

We should be getting “Guaita loyalty points” at this stage. It seems we tend to rotate between Illan Meslier and the Palace stopper quite often in this article. Once again it’s Guaita that gets the nod this time. This is largely due to the fact that he faces lowly Nottingham Forest this week.

I know what you’re thinking the ultimate FPL troll is back! We’ve all been burned by Lucas Digne at some point in our FPL journey. But is now the time to get on board with Villa’s new defensive minded manager? The Unai Emery effect appeared to be an instant one this week. Villa outplayed Manchester United in a 3-1 win on Emery’s debut and Digne even got on the scoresheet. With Digne back on left footed set pieces and part of a more solid back line, could he be a genuine FPL asset once more?

Manchester City’s kind run of fixtures continues with a visit from poor travellers Brentford on Saturday lunchtime. John Stones seems to be one of Pep’s go to defenders at the moment and he should secure a clean sheet this week providing he starts once more.

Our defence is rounded off by a bit of a punt in Matt Doherty. We’ve all thought (and probably said) that Emerson Royal is often painful to watch and after another questionable performance against Liverpool, surely he will be demoted to the bench this week. Spurs will expect to be on the front foot for the majority of their encounter with Leeds on Saturday which surely points to a Doherty start…

We’re going for the dynamic Palace duo of Eberechi Eze and Michael Olise for their visit to Nottingham Forest this week. Patrick Vieira seems to have worked out the conundrum of how on earth to get the two stars into the same team as Eze assisted before Olise struck the winner in a tough away fixture against West Ham United. Between them they dominate set pieces (bar penalties) and should get numerous chances to get among the goals once more in a very winnable GW16 fixture.

From one Villa FPL troll to another…is Leon Bailey also an option under Emery once more? The Jamaican livewire was instrumental in their victory over Manchester United, playing in a more advanced central role up front with Ollie Watkins and could be a bargain going forwards as an out of position midfielder. He will be hoping to sign off in style before the World Cup in what’s been a mixed season for him so far.

Dejan Kulusevki made his long awaited return to action against Liverpool on Sunday and wasted no time in making an impact, setting up Harry Kane’s goal 80 seconds after coming off the bench. The Swedish midfielder is clearly integral to Tottenham’s attacking play and should be a great FPL asset, starting with a game at home against Leeds United this week.

Manchester United star Bruno Fernandes returns from suspension to face Fulham this weekend and the defeat at Villa last week showed exactly how much they missed him. He returns this week in good form against a Fulham side that gives up plenty of shots on goal.

Grass is green, water is wet and Dominic Calvert Lewin is injured yet again. Everton’s talisman can’t catch a break, leaving a clear path for Neal Maupay to deputise once again. The Blues will be determined to avenge the heavy midweek EFL Cup defeat to a Bournemouth side that have started shipping goals again in the absence of number one goalkeeper Neto and Maupay should get plenty of chances to stake his claim as Everton’s primary goalscorer.

A sharp looking Patson Daka completes our final Differential XI before the World Cup break. Things are starting to click for Leicester once more, largely down to the sparkling James Maddison, and Daka looks a constant menace. It’s only a matter of time before the goals start to come for the Zambian striker.

Wondering what to expect in Gameweek 16? Check out our recent article.