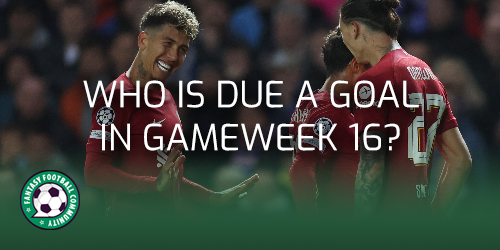 Picking out the players that look likely to score in an FPL gameweek is a big part of management. Using recent underlying stats from the Fantasy Football Scout, we assess which players are due a goal in Gameweek 16.

Due a goal in Gameweek 16

From last week’s selection of nine, Said Benrahma was the sole scorer in Gameweek 15. He bagged the opener against Crystal Palace, although it ended in a 2-1 defeat for the Hammers.

As it’s his second goal from three games, he leaves the list for good reasons. In contrast, the lack of shots from Ollie Watkins and Che Adams sees them also depart.

We’ve decided not to include Diego Costa here, as his suspension means it would be quite a shock if he scored in Gameweek 16! A pair of players are provided by both Liverpool and Man United, alongside the infinite presence of Danny Welbeck.

The Brighton man is without a goal from 12 league appearances, although he has assisted four times. It’s not for a lack of trying, with 26 goal attempts and 21 inside the penalty area.

There is also Gabriel Jesus, a man still on over 55% ownership but goalless in his last five outings. FPL managers looking to make a one-week punt before the World Cup break might be more attracted to differentials but the Brazilian faces Wolves – a side that has conceded seven times during their last two home matches.

Darwin Nunez and Roberto Firmino are at home to managerless Southampton. They should both start for Jurgen Klopp.

Meanwhile, the Sunday return of Anthony Martial could complicate things for Marcus Rashford and Cristiano Ronaldo but their trip to Fulham is appealing. The latter is expensive but has tiny ownership, faces a newly-promoted side and is one of the greatest goal scorers of all time. He could be a great punt.