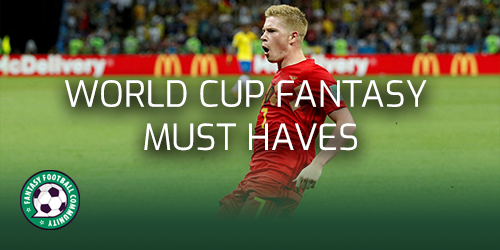 The World Cup starts this weekend. For that reason, we have brought in an international expert fantasy manager to provide us with his World Cup Fantasy must haves. Fantasy Football Scout and Fantasy Football Community contributor @FPLReaction reels off his essential assets for the round ahead.

The fantasy football community are always looking for ways to get ahead of the competition. There are content creators out there who are heavily clued up on international football and @FPLReaction is one of them.

Argentina are scoring plenty of goals as of late. In fact, in their last 10 matches they have netted 26 times. That averages out at 2.6 goals score per match which can be seen as a scoring average well worthy of investment.

Lionel Messi (£10.5m) should be in everybody’s team going into Matchday 1. Not only does Messi take his teams penalties but he has also picked up 11 goals and three asissts in his last 10 matches in all competitions for his country.

For me Messi is essential. With a fixture against Saudia Arabia in Matchday 1, Messi could have huge potential and could punish those who have chosen to leave him out.

In their last 10 matches in all competitions, Belgium have scored 20 goals. That averages to two goals scored per match. Belgium have shown huge potential in the past and face a Canada side who have been leaking goals.

Midfielder Kevin De Bruyne (£11m) comes at a high cost but fully justifies his high price-tag. De Bruyne has already notched up three goals and nine assists in his domestic league this season. That tallies to 12 goal contributions in his first 14 matches.

De Bruyne’s top form has translated into his Belgium performances. The midfield maestro managed two goals and two assists in his four World Cup qualifiers. The game also offers plenty of routes to points. Midfielders receive additional points for tackles and key passes. Kevin De Bruyne can benefit from this and for me has to be in those World Cup Fantasy teams when Matchday 1 arrives.

Finding teams that score a lot of goals can be a key factor when investing in attacking assets. For that reason, the Netherlands could be a team that fits that bill. In their last 10 matches in all competitions, Netherlands have scored 23 goals with an average of 2.3 goals scored per match.

With star striker Memphis Depay ruled out of starting in Matchday 1, many should be looking to midfielder Steven Bergwijn (£7m) to fill the void. Bergwijn has a fantastic price-tag in a position that is lacking in cheaper and mid-priced options.

The price is right, but his form is also worth factoring in. Bergwijn has managed to score six goals and create two assists in his last 10 matches for Netherlands. Playing in a forward position and sitting at a fantastic price means Bergwijn is an absolute must for me.

Denmark are becoming a team to fear and that was shown in their recent two wins against France, a team deemed as one of the favourites to win the World Cup. Although that is the case, some of the Danich assets have been well under-priced.

One asset that should not be left out is defender Joakim Mæhle. The Danish wing back is priced at just £4.5m. When taking into account his offensive ability, his price-tag can seem amusingly cheap. Joakim Mæhle somehow managed five goals in his World Cup qualifiers, cementing him as one of the best attacking defenders in the world.

Do you want to see our international fantasy experts first draft for World Cup Fantasy? You can find it right here.