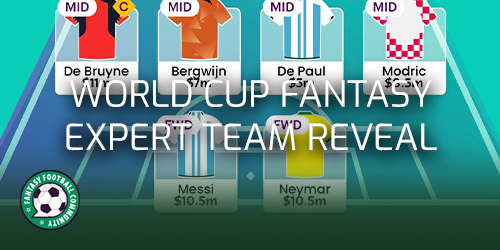 The World Cup starts tomorrow so we bring in @FPLReaction for his World Cup Fantasy expert team reveal. He goes through the latest updates to his team and the reasoning behind all of his selections ahead of the start.

Taking a look at a World Cup Fantasy expert team reveal can benefit those within the community that are still undecided in regard to their own squad. Team reveals can help bring clarity to key factors like captaincy, team selection and even chip strategy.

Although there has been some update to my latest draft, some of the selections are still up for debate. As the deadline draws nearer, it is highly likely this team will still change. I am also tinkering with my chip strategy which can inevitably change both the team and formation.

Aymen Dahmen (£4m) makes the team due to his price. Dahmen’s fixtures aren’t the best, but the Tunisian fans are adamant that he will play in goal. He will be paired with another £4m goalkeeper in Sergio Rochet of Uruguay, another player set to start in goal.

For me, there is no reason to back the more expensive goalkeepers in the game. The £4m goalkeeper pool looks quite strong already. The rotation between both of my current goalkeepers looks quite favourable.

England have shown strong defensive capabilities in their previous tournaments. For that reason, it could be worth backing both Luke Shaw (£5m) and Kieran Trippier (£5m). Shaw has shown premium returning rates when playing for his country and Trippier has been one of the best distributors in the Premier League this season. Both have very good fixtures all of the way through the groups stages.

Netherlands play with a wing back system which allows one the most explosive wing backs in world football to make the most of his offensive potential. That man is Denzel Dumfries (£6m), a player that should be in every team. Another player that should be in every draft is Denmark’s Joakim Mæhle (£4.5m). The Dane scored five goals in his recent World Cup qualifiers. Do not leave him out.

Another budget player to make the backline is Poland’s Matty Cash (£4m). Cash enables budget to be used elsewhere and also has solid goal threat.

Kevin De Bruyne (£11m) has been fantastic for his club this season and I think he could be absolutely gold in World Cup Fantasy. Steven Bergwijn (£7m) looks like a steal at his price. Bergwijn looks set to start in an attacking position and his recent form for both Ajax and Netherlands makes him highly appealing.

Rodrigo De Paul (£5m) of Argentina could be a fantastic enabler. There is attacking potential with De Paul and he showed that with his goal and four assists in his recent World Cup qualifiers. Another player that could be tough to leave out is Luka Modric (£8.5m). The Croatian is likely to take advantage of all of his available routes to points and also takes his teams penalties and set pieces.

Wahbi Khazri (£4.5m) of Tunisia could be one of the best enablers in the game if he starts. He has been out with injury in recent months but appears to be at full fitness now. The midfielder takes his teams penalties and can also play in a striker position. This raises his stock massively.

Lionel Messi (£10.5m) should be making most drafts going into Matchday 1. His recent form for club and country has been fantastic and appears to be improving. Neymar (£10.5m), like Messi, is both the main man for his team and the penalty taker. Managers can take advantage of Neymar’s greed in front of goal as players also receive an additional point for every two shots on target.

Cristiano Ronaldo (£10m) may be having issues with his club but for country he is absolutely relentless. Ronaldo faces a first match against the transitioning Ghana so there could be massive potential for more than one return.

Who are the World Cup Fantasy must-haves? You can check those out right here.