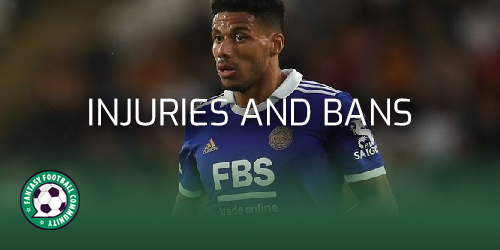 Being able to navigate around unavailable players is key to FPL success. Together with some useful Fantasy Football Scout information, here is the current list of injuries and bans heading into the World Cup break.

THE NOTABLE INJURIES AND BANS

Ben Chilwell (hamstring) – Ruled out until after the World Cup break.

Marc Guehi (suspended) – 5th booking of the season, so will miss the Gameweek 17 match.

Ben Godfrey (leg) – Back in training after fracturing his fibula in Gameweek 1.

Dominic Calvert-Lewin (knee and hamstring) – Will have a scan to determine the extent of this problem.

James Justin (Achilles) – Another season-ending injury for the full-back.

James Maddison (hamstring) – Brendan Rodgers says the Gameweek 16 knock is “just precautionary, a little soreness on the side of the knee.”

Luis Diaz (knee) – The Colombian will be out until beyond the World Cup.

Kyle Walker (abdominal) – Made the World Cup squad but hasn’t played since Gameweek 9.

Rodrigo Bentancur (suspended) – 5th booking of the season, so will miss the Gameweek 17 match.

Kurt Zouma (knee) – Unable to shake off warm-up injury, leading to an early removal in Gameweek 16.