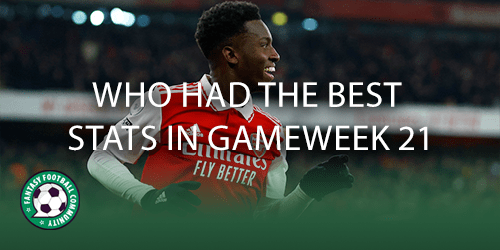 We look at who had the best stats in Gameweek 21. Using the Fantasy Football Scout members area, we take a look at some of the players that topped the key attacking stats from the latest round in FPL. Stats will include underlying data points like shots on target, chances created and other important stats to give us an indication of which players did well.

Looking at who had the best stats in Gameweek 21 can indicate which players did well. Even if the players who topped the stats didn’t return any points. This can be a good sign that the players were close to returning. FPL managers are always on the lookout for assets that could potentially return in the future. This could help with that.

It was another big week for Kieran Trippier in terms of stats. Amongst all players in the league he ranked first for crosses (16), first for successful crosses (10), first for chances created (eight) and joint first for big chances created (two). Tripper was rewarded for his great stats after bagging an eight-point return for keeping the clean sheet and earning three bonus points.

Nottingham Forest have improved their form massively over the last several matches. They went into Gameweek 21 with two wins on the bounce. Unfortunately that short winning run ended as they fell short, drawing to Bournemouth.

One player who has been maintaining some great stats lately is Morgan Gibbs-White (£5.5m). Amongst all players the midfielder ranked joint third for crosses (11), joint third for successful crosses (three) and second for chances created (seven). Although fantastic, Gibbs-White slumped to a two-point return this week.

Liverpool may be inconsistent but their still sustaining some of the best offensive stats in the league. They faced a tough challenge in their fixture against Chelsea in Gameweek 21. The match ended in a 0-0 stalemate.

New signing Cody Gakpo (£7.9m) put himself into some great positions. Amongst all players in the league this week he ranked first for attempts on goal (seven), joint first for shots in the box (six) and first for headed attempts on goal (three). Gakpo failed to convert his great stats into FPL points, returning just three.

Arsenal have been amazing this season and still sit at the top of the Premier League. They went into their Gameweek 21 match against Manchester United with bags of confidence. That was telling as they came out as victors in a 3-2 win.

The Arsenal attackers caught the eye. However one player in particular put in a great overall performance. Amongst all players in the league this week Eddie Nketiah (£6.6m) ranked joint second for attempts on goal (six), joint first for shots in the box (six) and joint first for big chances total (three). Nketiah made good on his stats as he collected a huge 13-point haul, scoring two goals and earning three bonus points.

Which players passed the eye test in Gameweek 21? Find out in our article here.