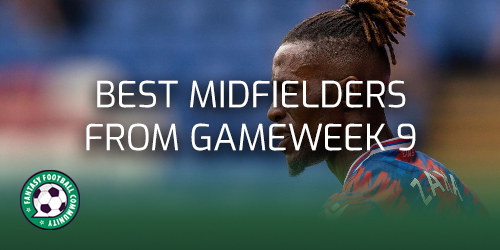 Whether you‘re using a Wildcard or browsing for transfers, we assess the best midfielders to own from Gameweek 9.

In Gameweek 8, over 660,000 Wildcard chips were activated amidst the chaos of three Premier League postponements. Likewise, an even higher number is anticipated over the international break, before Gameweek 9. Wildcarding or otherwise, this fortnight is a great time to look ahead and assess who are the best midfielders to own from Gameweek 9.

For all of Leicester’s problems right now, James Maddison isn’t one of them. The Foxes sit bottom of the league with just one point from seven matches. 22 goals have been conceded but, at the other end, Maddison had netted three times.

Although Danny Ward can’t be trusted in goal, the fixture swing brings fantastic opponents for Maddison. Nottingham Forest (H), Bournemouth (a), Crystal Palace (H) and Leeds (H) provide differential potential to someone whose ownership is only around five per cent.

Furthermore, of those who have played fewer than seven matches, Maddison has the most goal attempts throughout the league (20). This can be seen through Fantasy Football Scout’s Members Area.

Crystal Palace’s last two league outings have been postponed but FPL managers still remember the great form of Wilfried Zaha. After ending last season with eight goals in the final 13 games – his best top-flight campaign for goals (14) and FPL points (150) – another four have already been scored.

The Eagles’ fixture run up to the World Cup break is glorious, with even Chelsea (H) not so intimidating. As of Gameweek 6, Zaha’s 3.38 expected goal involvement (xGI) tally was only bettered in midfield by Mohamed Salah and Kevin De Bruyne.

Speaking of whom, the Belgian star leads the way for Premier League assists so far. His six included a pair at the weekend at Wolves, justifying why his ownership is about to overtake Salah’s. As expected, his combination with Erling Haaland is terrifying for opponents, taking Man City to 23 goals.

However, a word of warning. Not only was he rotated onto Pep Guardiola’s bench against Nottingham Forest, the champions blank in Gameweek 12. Those with De Bruyne will need to navigate this either through selling him or squeezing out an XI elsewhere.

If these red flags put you off De Bruyne but so do the underwhelming Salah and Son Heung-min, perhaps try the maverick route of Raheem Sterling. He has long-term Premier League reliability thanks to 78 goals and 54 assists over the last five seasons, averaging 197 FPL points.

Now regularly starting at Chelsea, three goals have arrived and expect new boss Graham Potter to keep the faith. Sterling is still in his prime, yet under the radar considering it’s his lowest FPL starting price for a while. One of the best midfielders of recent years, he’d be a calculated risk.

By quite some distance, Gabriel Martinelli is the most-owned midfielder in the game. The Brazilian is now established in Arsenal’s first-choice XI and three early goals made a mockery of his initial £6.0m price tag.

Like De Bruyne, he isn’t around in Gameweek 12, so imminent home fixtures against Tottenham and Liverpool could tempt some to sell. Whilst there is plenty of logic to that, Martinelli still offers outstanding value as a key player for the league leaders.

Finally, a player whose incredible 2021-22 has been followed by a terrible beginning to 2022-23. Jarrod Bowen is purely chosen here for his fixtures, with no attacking returns from his seven outings so far.

It’s not just him struggling, as West Ham are in the relegation zone having netted just three times. But surely they’re too good to keep being this way, especially with home clashes against Wolves, Fulham and Bournemouth within their next five matches.

If Bowen can somehow reignite the fire that brought in 12 goals, 17 assists and 206 FPL points, he’d quickly become one of the best midfielders.

Meanwhile, there will continue to be lots of brilliant content amongst the FPL community over these two weeks. Check out this content guide.