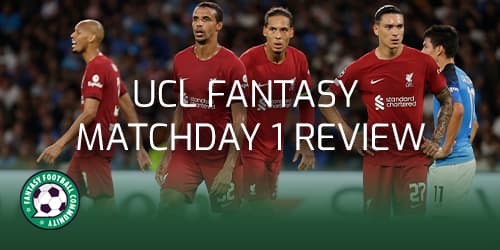 We take a look at the UCL Fantasy Matchday 1 review. The first round of Champions League Fantasy is now over. We pick out the key events and which players performed well in terms of goals, assists, clean sheets and player of the match awards.

Reflecting back on any given Matchday can help UCL Fantasy managers. Getting a good idea of which teams and players are in form can help us with future decisions like what chips we use, which players to bring in, which teams to back and a lot more.

A 1-0 shock home win saw English giants Chelsea defeated. Popular defensive assets £5.5m Chilwell and £6m James both failed to register a return. It was the Zagreb defensive players that took the bulk of the points. £5m defenders Ristovski and Peric both took away eight points for their clean sheet and ball recoveries.

Dortmund swept aside Copenhagen in their 3-0 win. The biggest haul came from £4.5m defender Guerreiro, he hit a massive 13 points for his goal and clean sheet. £7m Midfielder Jude Bellingham and Brandt came away with 11+ points for their goal, assist and player of the match award.

Marco Reus was also a favourite within the community. The £7.5m midfielder scored to reward owners with his eight points.

The tightly contested match between the clubs ended in a 1-1 draw. There was a lack of defensive returns but £6.5m Milan midfielder Saelemaekrs took a big 10 points for his goal and player of the match award.

Celtic frustrated Madrid for the first part of the game but as the match progressed the Scottish team were slowly but surely dismantled in a 3-0 loss. The Spanish Champions League holders lost 33% owned £11m striker Benzema in the 30th minute due to injury, this would have had huge implications within the community.

It was £8m forward Hazard who scored and assisted to take him up to nine points. Another Real Madrid midfielder and £7m Modric matched his teammate with his goal. £5.5m defender Carvajal also picked up nine points for his assist and clean sheet.

German side Leipzig came into the meeting with a very unstable defence and that showed. The Ukranian away side blew the Germans away after their 4-1 win. Taking the biggest haul was £5m midfielder Shved after he collected a huge 17 points. Those points consisted of two goals scored and the player of the match award.

English League holders Man City picked the Spanish side apart in their 4-0 away win. Hitting the biggest points total was premium defender and £6.5m Cancelo after he created two assists and kept a clean sheet making his total 15 points. Joining Cancelo was fellow defender and £5.5m Dias, he scored and picked up the clean sheet to edge himself one point away from his teammate.

£8.5m midfielder Foden came away with 11 points for his goal and assist. In addition, the whopping 53% owned star striker and £11m Haaland rewarded his owners with a 10-point return for his two goals scored.

After a thundering start where Paris scored two goals the Italian team found their feet defensively, they also responded with a goal of their own. However, that wasn’t enough for Juventus as they lost the game 2-1.

The biggest performance came from £11m forward Mbappe as he hit 13 points for his two goals and player of the match award.

Heavily backed Ajax took a very comfortable lead in their 4-0 win against the Scottish side. £5m budget midfielder Kudus took the spoils with his huge 14-point haul. Those points consisted of a goal, assist and a player of the match award.

Joining Kudus was £7m midfielder Berghuis, he struck a 11-point haul for his goal and assist.

The German side frustrated Sporting for most of the game but failed to sustain that, this saw them lose the match to the Portuguese side 3-0. UCL Fantasy favourite last season £7.5m midfielder Goncalves managed to avoid any significant points returns to the disappointment of his owners.

£7m midfielder Marcus Edwards collected 14 points for his goal, assist and player of the match award. Another UCL Fantasy favourite from last season was £5m Porro. The attacking fullback picked up 11 points for his assist and clean sheet.

It was a very quiet game until all three goals came towards the dying embers of the match. No asset within the match managed a double-digit haul. £9m forward Griezemann bagged eight points for his goal and player of the match award.

The German giants took a 2-0 away win in this meeting. Another UCL Fantasy favourite from last campaign was that of £9m midfielder Sane. The German international scored, assisted and picked up player of the match to take his total to 13 points.

£6.5m Kimmich took a position change last season from a defender to a midfielder in the game. He picked up eight points for his assist and 10 ball recoveries.

Football fans thought it could be a tough challenge to go to Napoli and win and that was reflected in the score line. The Italian side finished with a shocking 4-1 win which saw them take all three points comfortably.

The star of the show was £7m midfielder Zielinski, he came away with a massive 18 points. His two goals, assist and player of the match award all contributed to his haul.

The home team took away a tightly contested 1-0 win in their first fixture. The big UCL Fantasy performance came from £4.5m defender Sylla. His tally hit 17 points after he scored, kept a clean sheet and was awarded player of the match.

Barcelona came into the game heavy favourites and that was proved right as they picked Plzen apart in their 5-1 win. Former Bayern striker and £11m Lewandowski proved his worth with an 18-point haul. The Polish forward scored three goals and picked up player of the match.

The home side struggled to break down the French side for most of the match. However, Marseille struggled to keep that up and conceded two goals to give the English team a 2-0 win. There was a lack of standout performances other than £8.5m forward Richarlison. The Brazilian managed 13 points for his two goals and player of the match award.

Stay up to date with all of our UCL Fantasy content right here.