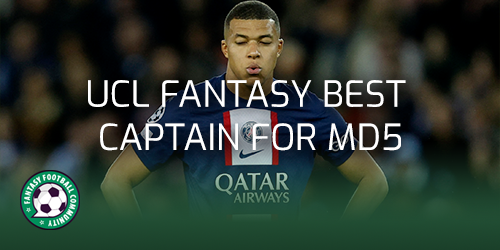 We pick out the UCL Fantasy best captain for Matchday 5. Using stats, form and fixture we can shortlist some of the best options for UCL Fantasy managers to give the armband ahead of the new round. Taking a look at both Tuesday and Wednesday.

Managers have the opportunity at two attempts in the hope of securing a successful captain return. Highlighting the best captain for Matchday 5 can be detrimental to both rank and a manager’s total points at the end of the Matchday. Making sure we take in as much information we can adds to the probability of a successful captaincy matchday.

PSG had a blistering start to their domestic season. The French side were also averaging over three goals scored per match. However, their recent dip has nearly halved their scoring average. Although that is the case, the attacking quality is there. PSG face Maccabi Haifa at home in Matchday 5. Even though the Israeli side are dominant domestically, they have still averaged 1.5 goals conceded per match over the last 10 matches.

The standout captaincy option for Tuesday is Kylian Mbappe (£11.2m). The Frenchman has now hit 10 goals and two assists domestically. That tallies up to 12 goal contributions in 11 matches played. That fantastic form has also been seen in the Champions League. Mbappe has scored four goals in his first four Matchdays in the UCL. Against a side conceding goals and in great form, it could be tough to avoid Mbappe as captain

The second standout option is Man City striker Erling Haaland (£11.1m). The striker has notched up an incredible 17 goals and three assists in his 11 matches played. This averages out at two goal contributions per match. He faces former team Dortmund in Matchday 5, a team Haaland has already scored against in Matchday 2.

For those feeling extra daring, backing Chelsea wingback Ben Chilwell (£5.5m) could be another option. He goes into match with both offensive and defensive potential routes to UCL Fantasy points.

Napoli have proven to be a team to watch out for. The Italian side have disposed of their opponents whilst also scoring plenty of goals this season. In fact, in the last 10 matches in all competitions, Napoli have bagged 31 goals. That averages pout at 3.1 goals scored per match.

Rangers lay ahead for Napoli in Matchday 5. The Scottish team have shown huge defensive fragilities in their current UCL campaign so far. In their four Champions League matches, Rangers have conceded a massive 16 goals. Rangers have to be considered a team to target.

Khvicha Kvaratskhelia (£5.6m) is a player that stands out for the captaincy. The young midfielder has collected five goals and three assists domestically this season. That totals to eight goal contributions in the 11 matches he has played. That great form has also translated into his UCL campaign. In the four Champions League match’s he has played so far, he has picked up returns in three of them. Those points include two back-to-back double-digit hauls in his last two Matchdays.

Check out all of the best options for Matchday 5 in UCL Fantasy in our top picks article right here.