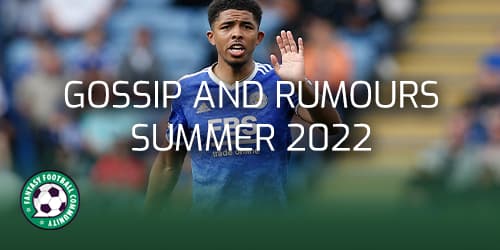 The Mail and The Times: Chelsea working on Chelsea

The Mail report that Chelsea have had al £60m bid for Wesley Fofana rejected by Leicester.The Times report that the Blues are now considering an improved offer of £70m for Fofana.

FPL Comment: If Fofana makes the move to London he would be the perfect budget pick. A Chelsea defender priced at £4.5m would be the perfect addition to FPL managers squads. He would also strengthen the defence making the likes of James and Chilwell more attractive options.

The Telegraph and Fabrizio Romano: Conte in for another wing-back

The Telegraph and Romano are reporting that Tottenham are closing in on a £21m deal for Udinese’s left-back Destiny Udogie. However, Romano reports that Udinese would like to keep the player on loan.

FPL Comment: If the player stays at Udinese on loan then he will not be an FPL asset. However, if the player comes to Spurs he could add an added complication to FPL decision making on who starts in the left-back position.

90min are reporting that both Manchester United and Chelsea are monitoring Leicester striker Jamie Vardy. Vardy has just one year left on his contract.

FPL Comment: Vardy is a proven Premier League striker who would be a good addition to either of these squads. With Ronaldo seemingly unsettled at Untied and Lukaku away from Chelsea, Vardy could be the perfect fit.

Romano is reporting that Chelsea are trying to secure the signing of Casadei from Inter.

FPL Comment: Casadei played 29 games last season in Primavera 1 (Italian Youth level). In that time he scored 13 goals and four assists. If Chelsea could sign him he would be one to watch for the future.

The Mail: Kasper on the move

The Mail are reporting that Leicester goalkeeper Kasper Schmeichel is close to joining French side Nice and will have a medical this week.

FPL Comment: If Schmeichel leaves Leicester ahead of the Gameweek 1 fixtures this weekend then £4.0m Danny Ward would likely be Leicester’s goalkeeper for at least the opening matches. Rodgers stated on Ward:

Danny Ward is an exceptional keeper. I’ve always said we’ve got a number one keeper there. He’s had some issues around his knee but that looks to be behind him now, he’s been training well. He’s looked good. If Kasper is to go, he’s a big possibility for us.

Sport, the Mirror and the Metro: De Jong gone?

FPL Comment: de Jong is a fantastic midfielder who would make a great addition to FPL. He would add defensive security as well as attacking threat to both the Chelsea and United teams. Therefore if he does sign for either club he would be attractive himself whilst also making the defence a more appealing investment.

The Mail: Ronaldo wants out

The Mail are reporting that Ronaldo has told Man United he wants to leave. Ronaldo reportedly wanted to play Champions League football. However the Mail report that United have reiterated that they don’t want to sell.

FPL Comment: With so much uncertainty over his future Ronaldo remains a hard avoid in FPL.