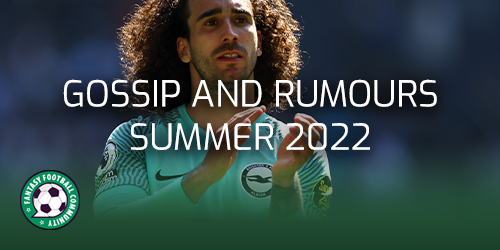 Fabrizio Romano and the Daily Mail: Newcastle closing in on January target Ekitike

Newcastle tried to bring Reims player Hugo Ekitike to the club in January. Romano is reporting that they are in talks again. Ekitike is a 19 year old striker who was also targeted by Borussia Dortmund. He is expected to sign a five year deal with Newcastle according to the Daily Mail.

FPL Comment: Ekitike returned 11 goals and five assists in 27 games in all competitions for Reims last season. He is known for his shots outside the box as well as his dribbling skills. Ekitike’s ability to win a foul and his indirect free kick threat could give him multiple routes to FPL points.

Football London: Pulisic’s time at Chelsea coming to an end?

Football.London are reporting that Chelsea’s Christian Pulisic may not be at the club next season after refusing to comment on his future. Pulisic started just 12 matches for Chelsea in the Premier League in the 2021/22 season.

FPL Comment: Pulisic’s lack of game time meant that he wasn’t a popular asset in FPL last season. If he stays and remains fit then he could be a great option, however a move away from London would put pay to that.

Fabrizio Romano and the Daily Mail: West Ham planning to strengthen their defence

Fabrizio and the Daily Mail are reporting that West Ham are in talks with Rennes to sign Nayef Aguerd. Aguerd is a centre-back who could potentially replace Isa Diop who is being linked with a move away from the club.

FPL comment: With West Ham playing European football again next season Aguerd would be a good strengthen to their team. West Ham struggled defensively last season as a result of big injuries, however with a new centre-back they could be a good defensive option for FPL managers.

The Guardian: Lukaku back to Inter?

After a difficult first season back with Chelsea, the Guardian are reporting that Lukaku will try and push for a move back to Inter this summer.

FPL Comment: A lot of FPL managers invested in Lukaku when he first arrived back at Chelsea, however his lack of minutes meant he was quickly sold. A move away from the Premier League would free up managers budgets for other premium options.

The Sun are reporting that Manchester United are keen to sign Mason Mount from Chelsea. They suggest that the sale of Chelsea has made new contract talks difficult and that the Manchester club are monitoring what happens closely.

FPL Comment: Mount was Chelsea’s top scoring FPL asset last season and therefore could be a great option if at United.

Tuesday 31st May: Man City in for Cucurella and Philips – the race to sign Spence

Monday 30th May: Mane to leave Liverpool – Conte to stay at Spurs and bring in Perisic