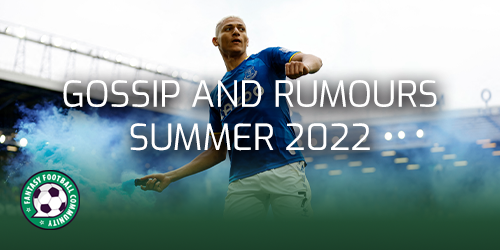 Firstly, keep checking out Fantasy Football Scout for announcements, regular articles and their brilliant Members Area. Also, here is a table of the main Premier League transfers so far.

Daily Mail: Richarlison wanted by the likes of Real Madrid, PSG and Tottenham

Having found some late-season form to help keep Everton in the Premier League, Richarlison could leave Goodison Park this summer. Several clubs have shown interest in the 25-year-old, including Real Madrid, Paris Saint-Germain and Spurs.

FPL Comment: With two years left on his contract, Everton may opt to cash in now to solve their financial mess. Six goals and two assists arrived in the Brazilian’s last nine games, including a Double Gameweek 37 score of 19 that many chose to captain.

Mikel Arteta is still on good terms with Man City players and staff after his spell as Pep Guardiola’s assistant manager. Heavily linked with forward Gabriel Jesus, there may also be a swoop for Oleksandr Zinchenko if City do indeed move for Brighton’s Marc Cucurella.

FPL Comment: Interestingly the article says that Arsenal would deploy Zinchenko as a midfielder rather than the left-back he is in Manchester. This central role is the same when playing for Ukraine. If the game relaunches with him as a defender, there could be out-of-position potential.

Telegraph: Maxwel Cornet has interest from West Ham and Everton

With Burnley’s relegation comes a £17.5m release clause for Maxwel Cornet, which interests both West Ham and Everton.

FPL Comment: The Ivorian was probably the Clarets’ best player during their failed survival attempt. Restricted to just 21 starts, the summer signing still found time to bag nine goals and could be interesting at a higher club. Furthermore, he can either play up front or out wide.