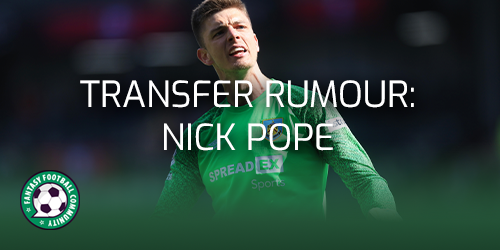 Burnley goalkeeper Nick Pope is currently away on international duty with England. However, his future at club level is attracting a lot of attention. Will Nick Pope be the next Nottingham Forest shot stopper?

Brice Samba had a fantastic season in goal for Nottingham Forest. He was a key player in their play off winning side. However, it is reported that Samba has rejected a new contract with the newly promoted Premier League side. David Ornstein reports that Samba has turned down his latest new contract offer and wants to leave this summer.

This would mean that Forest would be looking to sign a new goalkeeper for the 2022/23 season.

Nick Pope on the move?

Nick Pope was relegated with Burnley at the end of the 2021/22 season. The news of Samba’s potential exited from Forest has seen social media speculated that Pope could replace him.

Pope will be wanting to ensure minutes at the highest level ahead of the World Cup in November. This could make Forest an attractive option for the England goalkeeper.

At large Nottingham Forest fans seem disappointed at Samba’s potential exited, but excited by the potential arrival of Pope.

If Forest do sign Pope ahead of the new season what should they expect from him. Pope was tied ninth across Goalkeepers for FPL points scored in 2021/22. He was also kept nine clean sheets this season which was tenth best amongst goalkeepers.

Pope was also fifth for saves made this season with 122. This is good for additional goalkeeper points and bonus points. He was also top across all goalkeepers for parried saves with 26.

Indeed he was second for punches with five and top for recoveries with 93. As a result Forest would be signing a great goalkeeper. This would also be excellent for FPL managers as Pope is a tried and tested Premier League goalkeeper who is always popular with FPL managers.