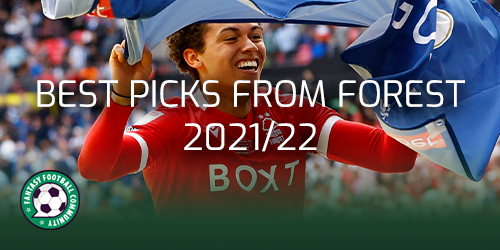 Nottingham Forest‘s 23 year wait for a return to the Premier League is the longest any team have waited. Forest finished fourth in the Championship but were promoted via the play-offs.

Over the course of the 2021/22 season they won 23 games, drew 11 and lost 12 times, registering 80 points. Ten less than Championship winners Fulham. We assess the top three players from the play-off winning team for FPL managers to add to their watchlist.

Brennan Johnson scored 19 goals for Forest in all competitions last season, more than any other Forest player. He also registered a tied team leading 10 assists over the course of the 53 matches that he played in.

At just 23 he has attracted a lot of attention from other Premier League sides including Newcastle, with Brentford trying to attract his signature unsuccessfully in January. His comments at the victory celebration will please Forest fans keen for Johnson to stay at the club.

Yesterday was the best day of my life. I can’t wait to play here next season.

Johnson has played in a variety of different roles for Nottingham Forest during the 2021/22 season. The Forest website lists him as a forward. He has played as a centre forward in 24 games this season. He has however been used in other positions.

These different potential positions could make Johnson a fantastic FPL option for the 2022/23 season.

Djed Spence has been at loan from Middlesborough for the 2021/22 season. This means that his availability in FPL next season is not a certainty. However when interviews at the victory celebrated Spence said he would ‘hopefully’ be at Forest next season.

Even if Spence isn’t available for Forest next season FPL managers should keep him on their watchlist should me move away from Middlesborough. Spurs are also reportedly interested in signing the defender.

Spence scored three goals and returned four assists in 46 appearances last season. He wing back started in 45 of those 46 appearances for Forest and had a pass completion rate of 77%. His shot accuracy was 56%. Should Spence remain with Forest or get a transfer to another Premier League side he would be a great option for FPL managers.

Yates is an attacking midfielder who returned nine goals and two assists from 51 appearances this season. Of these 51 appearances Yates started 48 times. The midfielder has a tackle completion rate of 79% which bodes well for additional points in the FPL bonus points system.

His attitude is something that the head coach loves; whilst it’s believed that Yates is the first into meetings and the last to leave the training pitch.

This doesn’t come as a particular surprise. Yates’ work rate is outstanding and he typically epitomises what playing for Forest should be all about.

The young box-to-box midfielder has captained Forest on three occasions this season. They all came under Chris Hughton but it seems Cooper would have no qualms asking him to lead the team.

Click here to read about the best FPL Midfielders 2021/22