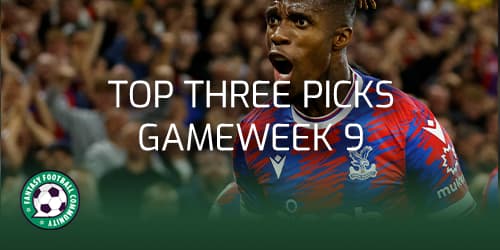 Each week David Munday is taking us through his top picks for the upcoming gameweek. Ahead of this weeks deadline he shares his Top three picks for Gameweek 9.

It feels like an age since we had Fantasy Premier League in our lives in the usual active sense. That said, I am one of those rare managers that actually looks forward to the international breaks.

We have to make so many decisions in this game of ours. If you spend too much time thinking about them, you can end up suffering from decision fatigue or analysis paralysis. Every Fantasy manager is different. But I know both of those concepts damage my ability to make the right call more often than not.

And so, I am feeling relatively refreshed as we head into Gameweek 9. In addition I am fairly confident in who I think will do well this weekend and the matches beyond it. Here are my top three picks for Gameweek 9.

This feels like one of the most open-and-shut cases for a Fantasy option in recent memory. James Maddison (£7.9m) faces Nottingham Forest and Bournemouth in his next two matches. They are the two sides bottom of the league for shots conceded since the beginning of the season. There is no better time this season to invest in a Leicester attacker.

Maddison is the stand-out option here when you consider his underlying statistics of late. He is second only to Youri Tielemans among Foxes players for key passes over the past four matches, while no colleague has matched him for shots on target over the same period. Factor in that Maddison is arguably more nailed on to start matches than even veteran striker Jamie Vardy, he feels like a secure bet for points over the next two matches at least.

Similarly, Wilfried Zaha (£7.2m) also has both form and fixtures on his side. The Crystal Palace man has attacking returns in four goals in as many Premier League starts, over his past four appearances he is behind only Erling Haaland for big chances and just two players have outperformed Zaha for shots on target. That statistical form could see him do well against Chelsea and Leeds in Gameweeks 9 and 10 respectively. Neither side has offered a particularly inspiring defensive effort this season, with the past four matches continuing that theme. Graham Potter has inherited a team that conceded the joint-second-most number of big chances over that period, while Leeds have given up just one fewer than that. Then, in Gameweek 11, it’s the division’s worst defence in Leicester. The Foxes have conceded more goals than any other side so far (22) and, in the past four matches, they have given up the most shots on target.

All while the world seemingly has their eye on a Bournemouth striker yet to register a big chance this season, I think plenty of people are sleeping on Mohamed Salah(£12.9m) for Gameweek 9. Admittedly, it has not exactly been the usual reliable start to a campaign for the Egyptian but I fancy his chances against Brighton. Salah has a decent record in matches with the Seagulls, having produced six goals, five assists and just two blanks in his past 10 meetings. Meanwhile, he has created more chances than any other player in the Premier League this season.