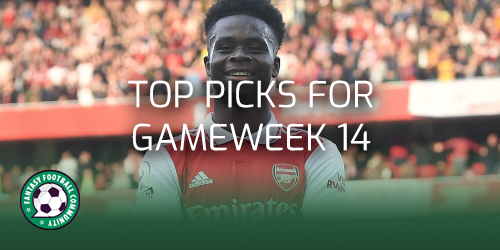 Filling in for David Munday’s regular look at the Gameweek’s top picks is Marc Jobling. Here, Marc selects who he thinks will be three of the top players for Gameweek 14.

After a notoriously low-scoring Gameweek 13 comes a strong set of fixtures for many of FPL’s most popular players. Arsenal, Liverpool, Man City and Tottenham assets are being pursued, although the uncertainty over Erling Haaland’s availability will play mind games with many top managers.

So I’ve picked out three assets that could have a solid impact on your team this week.

Perhaps it’s an obvious pick but Tottenham’s talisman is having a superb season that is being overshadowed by the freakish phenomenon of Haaland.

His goal against Newcastle made it ten goals from 12 games, blanking just once since the opening day. In fact, the Norwegian is the only player with more shots and a higher expected goals (xG) tally than Kane. However, put Kane against the defence that has conceded the most goals and there’s a real contender for alternative captaincy.

Especially as Bournemouth are without goalkeeper Neto, someone who instantly added stability to the Cherries’ back line. They had just conceded nine, three and four goals heading into the 33-year-old’s debut but haven’t let in more than two since.

Another possible quirk is that Bournemouth managed to keep Haaland and Mohamed Salah down to just five and three points. Are they a jinx for premium FPL attackers? Well, I’d still not like to bet on that.

Limited to half a match in Thursday night’s Europa League win, Marcus Rashford found a way to both score and be fresh for Sunday’s meeting with West Ham.

No league returns have arrived since but there is real out-of-position potential if he continues to be played up front.

The 21-year-old isn’t quite fully-rested, as he made a 33-minute cameo in Arsenal’s 2-0 defeat to PSV. Nevertheless, he is probably their top FPL asset right now ahead of Gabriel Martinelli and Gabriel Jesus.

A streak of four goals and four assists from eight league matches has seen Saka overtake the duo for total points. Also on penalty duty, he ranks third amongst midfielders for expected goal involvement (xGI) with 5.89 and is joint-fourth for penalty area touches (63).

Up next, a home clash with Nottingham Forest that is hard to resist. For managers losing faith in Wilfried Zaha or doubting the availability of Jarrod Bowen, Saka is the answer.