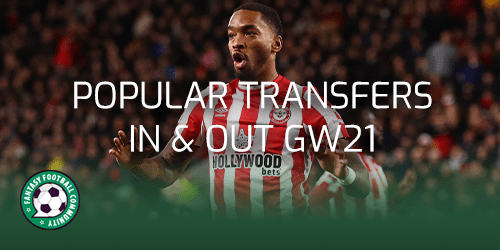 Gameweek 20 ended on Thursday evening with the match between Man City and Spurs. Gameweek 21 kicks off on Saturday lunchtime when Liverpool face Chelsea. Here we take a look at the transfer market and the key FPL transfers. FPL managers can also check who is popular and who isn’t through the Official FPL website.

The transfers below show the movement of players ahead of the Gameweek 21 deadline on Saturday lunch time.

Ivan Toney (£7.6m) returned from injury in Gameweek 20 and immediately refund his goalscoring form. The forward also picked up three bonus points. He has now returned in his last four Premier League matches. Since the Gameweek 20 deadline 587,000 managers have purchased the forward.

Martin Odegaard (£6.8m) scored in the North London derby in Gameweek 20. Over 363,000 managers signed the midfielder this week, ahead of Sunday’s visit of Manchester United.

Solly March (£5.1m) registered 19 points in Gameweek 20. The Brighton midfielder scored two goals, picked up an assist, all three bonus points as well as a clean sheet point. Brighton travel to Leicester in Gameweek 21. The Foxes have not scored at home in their last three Premier League matches and in that same period have conceded five goals. March has over 331,000 new managers.

Luke Shaw (£5.2m) has been in excellent form since returning from the World Cup. Over 178,000 FPL managers bought the defender ahead of Gameweek 20.

Leandro Trossard (£6.7m) was the most transferred out player ahead of Gameweek 20. He remains . The Brighton midfielder didn’t feature in either of Brighton’s last two Premier League fixtures. Over 288,000 managers have sold Trossard this week.

Aleksandar Mitrovic (£7.1m) was in the top five most transferred in players last week. However, ahead of Gameweek 21 he is the second most transferred out. The forward missed his third penalty of the season in Gameweek 20 and there are now doubts on whether he will remain on penalty duty. Over 233,000 managers have sold the Fulham man.

Liverpool’s Mo Salah (£12.8m) is the second most transferred out player. Liverpool have been struggling for consistency recently and Salah has now failed to return in the last three Gameweeks. Over 186,000 managers have parted company with the most expensive player in the game.

Salah’s teammate Darwin Nunez (£8.8m) is also a popular transfer out. The forward missed Gameweek 20 through injury and remains a doubt for the Chelsea match in Gameweek 21. Darwin has been sold by over 171,000 managers so far.

Despite Arsenal being in excellent form Gabriel Martinelli (£6.8m) is a popular transfer out this week. Many FPL managers seem to be making the move from Martinelli to teammate Martin Odegaard (£6.8m) after his impressive performance against Spurs in Gameweek 20. Martinelli has over 168,000 transfers out so far.