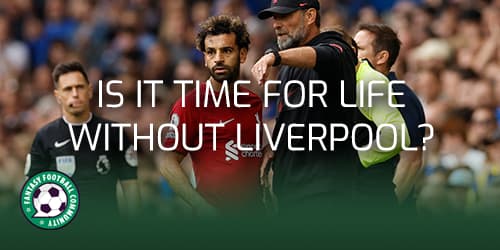 Liverpool have had a difficult start to Klopp’s seventh season in charge at Anfield. The Merseyside Reds have won just two of their opening six matches and lost their opening Champions League fixture. With Liverpool assets still commanding premium price tags is now the time to prepare for life without Liverpool assets?

During preseason the majority of FPL managers were building squads which contained at least two Liverpool assets. Mo Salah (£13.0m) has been the top scoring player in Fantasy Football in three of the last five Premier League seasons. Likewise, Trent Alexander-Arnold (£7.5m) is always amongst the highest scoring defenders in the game.

The historic returns of the likes of Salah and Alexander-Arnold meant that they were in the majority of managers teams heading into Gameweek 1. However with the performances that we have seen from Liverpool, coupled with Alexander-Arnold’s 58 minute substitution in Gameweek 6 Liverpool assets are looking more disposable. Add to this Liverpool’s lack of a fixture in Gameweek 8. Is now therefore the time for life without Liverpool assets in our FPL team?

The case to hold

When managers look at the underlying stats for Liverpool players they are still attractive prospects. Alexander-Arnold is top for expected goal involvement (xGI) across the defenders in the game. Likewise Darwin Nunez (£8.9m) is fifth for goal attempts despite only playing in three matches whilst all those above him have had six appearances each.

In addition Salah has created 24 chances for his teammates this season, more than any other midfielder in the game.

Liverpool fail to play in Gameweek 8, however they do have some attractive fixtures after the international break.

With Salah finding his shooting boots in the Champions League managers who aren’t Wildcarding over international break or heading in to Gameweek 8 could be tempted to hold.

The case to sell

Liverpool players returns currently show them as a shadow of their former selves. The Liverpool assets numbers are down on the same time last season in almost all aspects.

At their price points the Liverpool players are not performing the level of points expected for the money that FPL managers need to invest. Alexander-Arnold is the most expensive defender in the game, however is only the 12th highest scoring defender.

Likewise, Salah is the highest priced midfielder in the game, however he is currently being outscored by Pascal Gross (£6.0m), Marcus Rashford (£6.5m) Alexis Mac Allister (£5.6m) and Rodrigo (£6.3m) all of whom are at least half his price.

Indeed with the change in system at Liverpool with the arrival of Nunez and as players recover from injury there may be different targets. Therefore at the moment it seems most sensible to part ways with the Liverpool assets until an improvement in form is shown. Especially with no fixture this weekend.

Thinking of playing a chip in Gameweek 8. Click here for a Free Hit team and here for a Wildcard.