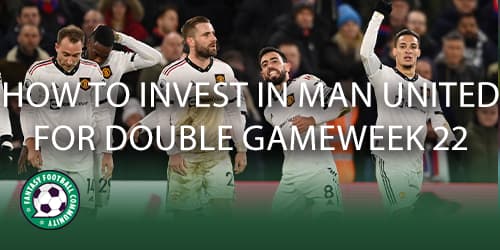 We take a look at how to invest in Man United for double Gameweek 22. Looking at form and minutes to determine who could be the best picks whilst utilising the Fantasy Football Scout members area to help us.

Double game weeks can be the most exciting period of the season for many fantasy managers. They can help gain rank or an edge over mini league opposition if we pick the right players so looking at how to invest in Man United for double Gameweek 22 could be key.

Who do Man United face?

Man United face fixtures against Leeds and Crystal Palace in their double Gameweek 22.

Crystal Palace are in a really poor run of form. They have won just one of their last six matches, losing three and drawing two. Defensively, in the same period they rank the worst team in the league for shots in the box conceded, total shots conceded, shots on target conceded and attempts from set play conceded. This could indicate that investing in the Man United attackers could be beneficial.

In terms of attack, Crystal Palace have failed to score in three of their last six matches. In the same period they rank the worst team in the league for goals scored, shots in the box and the second worst for big chances total. This could indicate investing in the Man United defence could also be beneficial.

Leeds have won one of their last six matches, drawing four and losing one. This highlights a poor run of form. Defensively Leeds have conceded two goals in four of those six matches. In the same period they also rank the worst team in the league for big chances conceded, second worst for shots in the box conceded and the third worst for goals conceded.

In terms of the Leeds attack, they have failed to score in two of the same six matches. They also rank in the bottom eight teams for attempts on goal and shots on target.

Both Leeds and Crystal Palace are reflecting two of the worst defences in the league in the last six matches so investing in the Man United attacking assets is a priority. Both opponents are also unconvincing in attack, especially Crystal Palace. This also means having some defensive cover from Man United is also key.

There can be little doubt that the best defensive asset to invest in at Man United is Luke Shaw (£5.2m). The left back has been one of the Reds most reliable assets in terms of minutes, starting the last 13 Premier League matches.

Luke Shaw also ranks as the best player amongst the Man United defenders in terms of expected goal involvement this season. Scoring a goal and creating an assist this campaign. Other managers could consider the likes of goalkeeper David De Gea (£4.9m) and defender Aaron Wan-Bissaka (£4.3m).

Similar to Luke Shaw in defence, it could be very difficult to ignore Marcus Rashford (£7.1m) as the best option in the Man United attack. As well as scoring nine goals and creating three assists this season, Rashford is also the highest ranked player in the attack for expected goal involvement this season.

In addition, amongst all midfielders in the last six matches, Rashford ranks first for goals, second for attempts on goal, joint first for shots in the box and first for big chances total. Other options include midfielders Christian Erkisen (6.3m), Antony (£7.3m) and Bruno Fernandes (£9.8m).

Who is the third best Man United option?

The best third option from Man United is Bruno Fernandes. The opponent’s defensive fragilities indicate investing in a double attack rather than a double defence is the way to go. The Portuguese midfielder has banked five consecutive returns in a row.

You can stay up to date with all of our latest FPL articles right here.