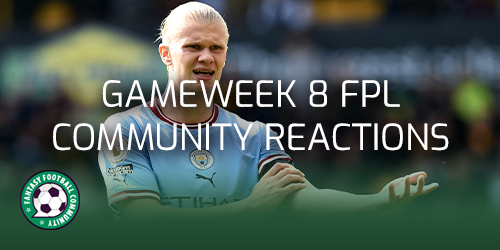 We take a look at some of the best Gameweek 8 community reactions from FPL Twitter as the round plays out. With both positive and negative reactions to some of the key events including FPL assets.

Reactions in the FPL Gameweek 8 community can help other FPL managers by highlighting things like player minutes, player form, team form and anything else that could have implications within our fantasy teams.

Greyhead points out that legendary chess player and elite fantasy football manager Magnus chose to select £4.7m Digne on his wildcard. The Aston Villa proved some people wrong within the community as he picked up seven points for his clean sheet and bonus point.

Aston Villa do not face a tough fixture on the fixture difficulty rating system until Liverpool in Gameweek 17. This could be the performance Digne need to appeal to those looking to target the nice fixtures ahead.

Marcin reminds the community that Fulham took a thrilling 3-2 away win against Nottingham Forest. £6.9m striker Mitrovic became a top target ahead of his great fixtures starting in Gameweek 8. However, in the three goals Fulham did score the forward failed to register a single attacking return.

£4.6m midfielder Andreas also failed to take away any significant FPL points, which came as a surprise for many considering the score line.

Regular content creator and contributor to Fantasy Football Scout Andy highlighted the fact Wolves defender and £4.5m Collins picked a red card for his challenge on Grealish. Wolves were dismantled by Man City and really struggled to come back with 10 men.

Andy also mentions he captained £11.4m Tottenham striker Kane. He chose the Spurs man over the record-breaking captain and forward Haaland. The Man City man eased his way to an FPL return in under 17 minutes of playing against his opponent.

With thousands of wildcards being activated this week, Dino shared the same feeling as a large part of the FPL community. £5.2m goalkeeper Pope was one of several defensive players that managers invested in. However, those owners were disappointed as Bournemouth scored to break owners’ hearts.

£5.3m Newcastle defender Trippier currently sits at an ownership of nearly 44%. That vast percentage of players were rewarded. Although failing to keep the clean sheet Trippier still managed to return points for his assist. The Newcastle man ended up on five points.

Regular FPL content creator and contributor to Fantasy Football Scout Tom highlighted several things. One of those being another top target for managers using the wildcard chip. Newcastle man and £7m forward Isak stepped forward to put away a penalty.

Isak rewarded those managers that took a chance on him. His goal resulted in a further three bonus points. This meant the Swedish forward hit nine points in total. With great fixtures ahead, he could well be heavily targeted by managers moving forward.

Did you miss out on the Wolves v Man City game? You can catch up here.