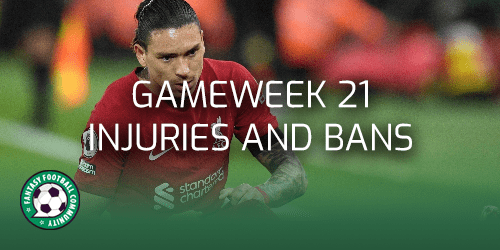 Being able to navigate around unavailable players is key to FPL success. Together with some useful Fantasy Football Scout information, here is the current list of injuries and bans heading into Gameweek 21.

THE NOTABLE INJURIES AND BANS OF GAMEWEEK 21

Joao Felix (suspension) – Red card in Gameweek 19, not back until Gameweek 23.

Nathan Patterson (knee) – Ligament injury from Gameweek 19 will keep him out for six-to-eight weeks.

Donny van de Beek (knee) – Ruled out for the season.

Anthony Martial (leg) – Came off with “some complaints” during half-time of Gameweek 20.

Bruno Guimaraes (ankle) – Had to leave at half-time during Gameweek 20.

Ryan Yates (facial) – Off at half-time during Gameweek 20.