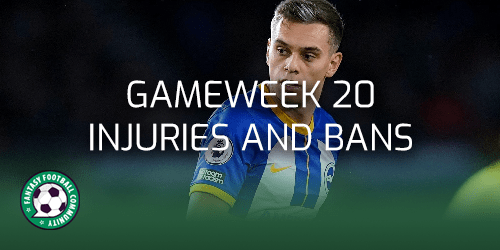 Being able to navigate around unavailable players is key to FPL success. Together with some useful Fantasy Football Scout information, here is the current list of injuries and bans heading into Gameweek 20.

THE NOTABLE INJURIES AND BANS OF GAMEWEEK 20

Emile Smith-Rowe (groin) – After months out, he is back in training.

Adam Smith (suspension) – 5th yellow card of the season, out for Gameweek 20.

Nathan Patterson (knee) – Ligament injury from Gameweek 19 will keep him out for six-to-eight weeks.

Gianluca Scamacca (knee) – Set to have a scan on some knee discomfort.