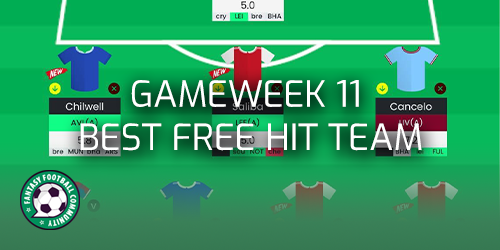 With a new Gameweek upon us we take a look at the free hit chip. Using the Fantasy Football Scout members area we can use the help of the season ticker and underlying stats to determine the Gameweek 11 best free hit team.

We can see that Wolves, Fulham, Tottenham, Bournemouth and Leicester are in the top five teams with the best fixtures.

We can see that Man City, Liverpool, Everton, Newcastle and Aston Villa are in the top 5 teams with the worst fixtures.

Using the Live FPL website we can use one of its fantastic tools available to plan transfers weeks in advance. Not just this, but we can also create team drafts to plan for using a chip. Take a look at the best free hit team for Gameweek 11:

Wolves rank first on the fixture ticker for Gameweek 11. They come up against a side who sit second from bottom of the Premier League table. Amongst all teams in the league Nottingham Forest are the second worst for shots on target, the second worst for goals scored and the third worst for chance per minutes. For those reasons Wolves goalkeeper Jose Sa (£5m) could be a great option.

Danny Ward (£4.1m) sits on the bench ready to come on if Sa fails to play.

Chelsea play strugglers Aston Villa in Gameweek 11. With a back three now seemingly favoured by new manager Graham Potter, this could indicate the wingbacks as highly targetable assets. Reece James (£6.1m) would have been ideal. However due to his injury, left wingback Ben Chilwell (£5.8m) could be an easy replacement.

Although Joao Cancelo (£7.3m) does have a match against Liverpool, he sits as the highest returning defender in the game. Liverpool are out of sorts with several key injuries. This could even further the likelihood of a Man City clean sheet. Combined with his attacking potential and high ownership, Cancelo has to make the team.

Arsenal defender William Saliba (£5m) has become one of the best value assets in the game. He is currently the third highest scoring defender in FPL. Although a centre back, Saliba has already managed two goals and an assist. Saliba’s price also enables budget to be used elsewhere.

Crystal Palace face bottom of the league Leicester. The Foxes have conceded more goals than any other team in the league so far. For that reason, it could be wise to invest in a Crystal Palace attacker. Wilfried Zaha (£7.4m) could be the player mangers select. With four returns this season and on penalty duty, the midfielder could have huge potential for the round ahead. Leicester’s James Maddison (£8.3m) ranks as the joint fifth highest player for attempts on goal this season, he makes the team.

Arsenal are currently top of the Premier League. In terms of goal threat, amongst all teams Arsenal rank the second highest for goals scored, second for attempts on goal and second for big chances total. For those reasons, investing in the Arsenal double attack with Bukayo Saka (£7.8m) and Gabriel Martinelli (£6.6m) could be beneficial.

Fulham midfielder Andreas Pereira (£4.6m) sits as the first substitute. In the unlikely event one of the starting eleven does not play, Andreas has solid attacking potential.

Erling Haaland (£12.2m) is the only player in the game to break the 100-point barrier. His relentless form and unmatched stats, not only mean he could be essential, but also a very good captaincy option against a leaky Liverpool defence.

Monitoring the Fulham press conference could be key. Aleksander Mitrovic (£6.8m) failed to start in Gameweek 10 due to a small injury. If he returns fit, he could have huge potential against one of the worst defences in the league, Bournemouth.

Which players could do well against their Gameweek 11 opponents? Take a look here.