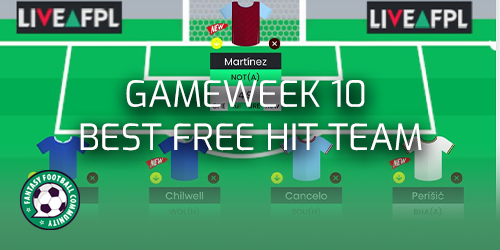 With a new gameweek upon us we take a look at the free hit chip. Using the Fantasy Football Scout members area we can use the help of the season ticker and underlying stats to determine the gameweek 10 best free hit team.

The free hit chip in FPL allows managers, within the same budget and formational limits, to select a team for one particular gameweek. Managers can attack any given gameweek with the free hit whether that be to utilise a good set of fixtures, in-form teams or players or a mixture of it all. However, Experienced FPL managers usually tend to use the chip in blank gameweeks.

We can see that Aston Villa, Leicester, West Ham, Man City and Nottingham Forest rank the top five for having the easiest fixtures on the fixture ticker.

Southampton, Arsenal, Liverpool, Wolves and Brighton rank the bottom five for having the toughest fixtures on the fixture ticker.

Using the Live FPL website we can use one of its fantastic tools available to plan transfers weeks in advance. Not just this, but we can also create team drafts to plan for using a chip. Take a look at the best free hit team for Gameweek 10:

Aston Villa rank first on the fixture ticker with a meeting against Nottingham Forest. The newly promoted side rank as the second worst in the league for shots on target. For that reason, Emiliano Martinez (£4.9m) could be a fantastic inclusion. The goalkeeper has now managed back-to back clean sheets in his last two gameweeks.

Man City reign as one of the best defensive units in the league. Joao Cancelo (£7.2m) is currently the second highest scoring defender in FPL. His advanced positioning, love for shooting and creative ability all make him an easy option. Although Tottenham are far from their best defensively, we can’t rule out an incoming clean sheet. Amongst all defenders in the league Ivan Perisic (£5.6m) tops the expected goal involvement data. The Croatians creative and distribution ability can be another factor as to why he makes the team.

Wolves rank as one of the worst teams in the league offensively. Amongst all teams, they are the worst for goals scored (just three) and the third worst for shots on target. For that reason, it could be beneficial to double up on the Chelsea defence. Reece James (£6m) and Ben Chilwell (£5.8m) were both two of the best defenders in the league in terms of expected goal involvement per 90 minutes last season. With a great chance of a clean sheet and good attacking potential, both make the free hit team.

Leicester rank second on the fixture. This indicates there could be big potential in investing their assets. They face Bournemouth in Gameweek 10. Bournemouth are statistically one of the worst defences in the league. Amongst all teams they are the third worst for goals conceded, the second worst for shots on target conceded and the second worst for attempts from set plays conceded. Both Harvey Barnes (£6.9m) and James Maddison (£8.1m) get the nod.

West Ham face a meeting against Fulham in Gameweek 10. Fulham are another team that have conceded some of the worst defensive stats in the league this season. They are the fourth worst for goals conceded, the third worst for shots in the box conceded and the first worst for big chances conceded. For those reasons, Jarrod Bowen (£8.1m) could have great potential ahead.

Man City’s Erling Haaland (£12.1m) simply has to make the free hit. The forward is topping several offensive stats whilst also notching up the most goals in the league and by a distance. Haaland also eases the captaincy armband.

Tottenham’s Harry Kane (£11.4m) sits as the second highest scorer in FPL. The forward has only failed once to return in a match this season. His relentless consistency makes him high priority in the free hit this week. Brentford are amongst the top six teams for goals scored, goals scored inside the box, big chances scored and shots on target. With the help of his teams stats Ivan Toney (£7.3m) is currently the third highest scoring forward in the game.

Which players could do well in Gameweek 10? Check out the best players against their opposition here.