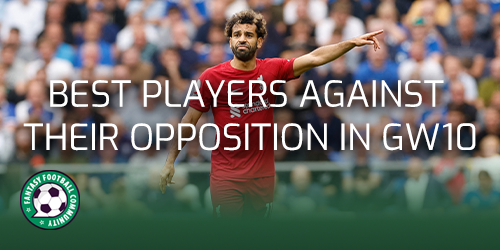 We take a look at some of the best players against their Gameweek 10 opposition. Using previous head-to-head records and underlying stats from the Fantasy Football Scout members area to help us pick out some great FPL picks for the round ahead.

Picking out the best players against their Gameweek 10 opposition could be helpful in making both transfer and captaincy decisions. The more information FPL managers have the better our decisions tend to be in terms of having successful assets in our fantasy teams.

Mohamed Salah (£12.8m) has now dropped in price again. Managers are now looking to sell the Egyptian after only four returns in his last seven matches. His ownership within the game has dropped to just 32%. With a match up against Arsenal next, we could well see even more managers sell, but should they?

As we can see in the graphic below, Salah’s record against Arsenal is fantastic. In the 11 matches the Liverpool man has played against first place Arsenal, he has returned in eight of them. Those returns include eight goals and four assists. This means that Salah has created more goal contributions then matches played.

Chelsea midfielder Sterling (£10m) has had an ok start to life at Chelsea so far. In his first seven matches the winger has picked up a return in three of them. Those returns include one double-digit haul of 15 points.

Sterling has a very strong record against upcoming opponents Wolves. In the eight matches the Chelsea man has played against his Gameweek 10 opponents, he has picked up returns in five of them. With premium options in FPL looking short, some managers could even be tempted to bring him into their teams.

Leicester have shown although defensively weaker, offensively, they can be very strong. Main man Maddison (£8.1m) continues his impressive start to the season. The midfielder has now returned in five of his seven matches played this season.

Man City maestro has started the season tremendously. De Bruyne (£12.4m) has now notched up six returns in the eight matches he has played so far. Those returns include two double-digit hauls. The Belgian faces a match against Southampton in Gameweek 10.

In the 11 matches De Bruyne has played against the Saints, he has returned points in a huge seven of them. With four double-digit hauls in that same period, it is clear that the Man City midfielder has had some great success against them.

Portuguese attacker Bruno Fernandes (£9.8m) is a far cry from his old form. The Man United man managed the dizzy heights of 200+ points in a previous season, a reflection of his potential. Unfortunately, that great form has dwindled as of late. Fernandes has managed just two returns in his first seven matches this season

Man United face Everton in Gameweek 10. Although taking a huge dip in form, Everton could well trigger something from Fernandes. In the five matches he has played against Everton; Bruno has returned in all but one of them.

Which players had the best stats in Gameweek 9? You can find out here.