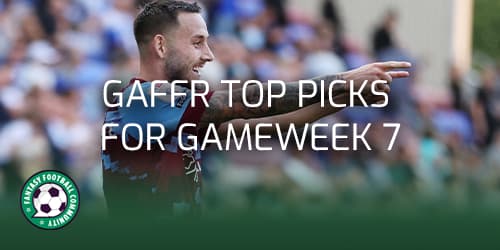 With a quick turnaround we take a look at the GAFFR top picks for Gameweek 7. Using the fixture ticker on the Official GAFFR website and form we can pick out some players with lots of potential for the upcoming gameweek.

Looking at GAFFR top picks for Gameweek 7 can help managers with those all-important decisions as the deadline quickly approaches. Deciding on which players to bring in and which players to captain are two of the biggest factors in any given gameweek. With the options below we can hopefully bring some clarity.

The £5.2m Bristol City forward now sits as the joint third highest scoring forward in GAFFR on 40 points, which interestingly is the exact same amount as team-mate and fellow forward £8.6m Andreas Weimann. His price tag means he could be a great enabler in GAFFR moving forward, but what of his form?

In the last six matches straight Conway has come away with a return. His five goals and two assists has made him a top target going into Gameweek 6 with a match against Huddersfield. His opponents have failed to keep single clean sheet this season in all competitions. Of those matches Huddersfield have even conceded more than two goals on four of those occasions.

The Burnley attack has now started to click. In the last two league matches they’ve managed to put away a whopping eight goals. A large factor in that is £6m Brownhill. The midfielder is now the second highest scoring midfielder in GAFFR, just behind QPR midfielder Chair by two points.

Brownhill’s goal contributions have been collected over the last two league matches as he hit three goals and one assist. He faces Millwall in Gameweek 6, a team have who have conceded a goal in their last six consecutive matches in all competitions. At £6m and one of the cheapest ways into the Burnley attack Bronwhill becomes a top pick for the gameweek ahead.

Hull have had an impressive start to the season which has seen them third in the Championship League table. Not only have they had to face some of the toughest teams on paper in the league against the likes of West Brom, Coventry, Norwich and Burnley but they’ve scored against all of them.


£6.6m forward Estupiñán currently reigns at the top of the forwards category for the most GAFFR points. In fact, the striker is 15 points clear of second place Ross Stewart of Sunderland. His seven goals and one assist make him one of the deadliest attackers in the league.

Hull face QPR next. The upcoming opponent aren’t short of goals but they lack at the back. They failed to keep a clean sheet in all seven of their matches in all competitions which gives Estupiñán a great opportunity in Gameweek 7.

QPR have an ability to score goals in any given game which was shown last season when they went on a massive run of consecutive scoring. One of those key contributors is £8m midfielder Chair. The midfielder was a great option for GAFFR managers last season, but the new season could be even better for him.

Chair is currently top of the midfielder’s category in GAFFR for points. His two goals and three assists mean on average a return in every match but one this season. The attacker faces a meeting against third place Hull in Gameweek 6. Although the tigers can score goals they also lack at the back. In fact, in the eight matches in all competitions Hull have only kept one clean sheet.

The £7.7m Norwich striker has continued his top start to the season. The American has now returned in each of his last three matches. Those goal contributions consist of four goals which has only extended his appeal in GAFFR.

Norwich face Birmingham away from home this week. The home side have shown huge inconsistency with only one win in the six Championship matches played. Josh Sargent could take advantage of the poor defensive form of his opponent and so becomes a top pick for Gameweek 7.

Find all of our great GAFFR content all in one place right here.