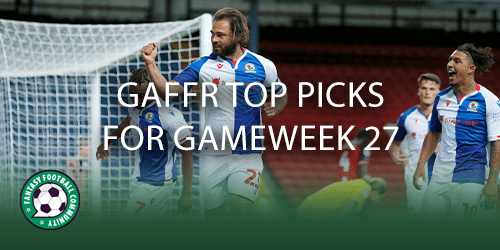 We go through the GAFFR top picks for Gameweek 27 using stats, form and fixture ahead. After an eventful Gameweek 26, we look ahead to the new round. Gameweek 27 starts on the 14th of January. This means managers have plenty of time to get their teams ready.

Going through the GAFFR top picks for Gameweek 27 can be hugely beneficial. As fantasy managers we are always looking for players who could do really well in the next round. For that reason, picking out some of the best assets for the Gameweek ahead can be detrimental to chase down the competition.

Blackburn are looking to shorten the gap between them and the top two teams in the league. After a slight slump they have managed back-to-back wins in the league and the cup. Blackburn face Rotherham in Gameweek 27.

Rotherham are in a torrid run of form, failing to win any of their last seven matches in all competitions and conceding two or more goals in six of those same seven games. They are a team to target so investing in Blackburn attackers could be key.

One player many GAFFR managers could look to is Bradley Dack (£6.4m). After overcoming a long term injury, Dack seems to be building in confidence and form. The midfielder has been key to the Blackburn attack lately, bagging a goal and an assist in his last two matches. Dack also offers a very cheap way into an in-form team.

Burnley are rampaging their way through teams this season. They currently sit first in the Championship with a run of six Championship wins in a row. Not only is their form fantastic but their also scoring plenty of goals. In fact, Burnley have scored two or more goals in eight of their last 10 matches.

Buying into the Burnley attack could be vital considering their ability. They face a Coventry side who have only won one of their last five matches. Burnley are playing in a league of their own, so whoever the opponent, they are likely to score.

One of the best ways into the Burnley attack is Anass Zaroury (£7.1m). The Moroccan is in fine form with three goals in his last four matches, two of them against Premier League side Bournemouth in the cup. The midfielder has totalled five goals and two assists for Burnley so far and that will inevitably extend.

Its been a tough return to league football for QPR since the break. After losing their manager, QPR have been on a downward slope but the return of their most influential player could be the turning point that they need going into Gameweek 27.

Ilias Chair (£8.3m) has been one of the most effective attacking players in the league this season and that can be reflected in the fact that he sits as the second highest scoring midfielder in GAFFR. Chair scored on his return against second place Sheffield United. With a game against an inconsistent Reading next up, it could be time to bring the Moroccan back into our teams.

Sunderland are having a fantastic season and a lot of that can be can de drawn from their exciting front line. In the 26 matches they have played, Sunderland have scored two or more goals in 12 of them. They face an inconsistent Swansea in Gameweek 27 and there is one standout option.

Ross Stewart (£6.7m) is seemingly over his recent injury and he has returned in top form. Not only does the striker have penalty duty but he has scored a goal in every single match he has played since his return for Sunderland.

What happened in GAFFR Gameweek 26? Check out the key takeaways from every match in our article here.