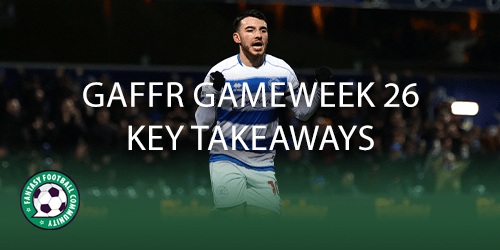 We take a look at the GAFFR Gameweek 26 key takeaways. We go through each and every game that played in the Championship in the most recent round. Taking into account clean sheets, assists, goals and bonus points we highlight the most successful assets in Gameweek 26.

Blackburn squeezed a 1-0 win against Cardiff in Gameweek 26. The Welsh side’s assets failed to hit more than five GAFFR points with goalkeeper Allsop picking up their biggest return due to his first half clean sheet and save point.

Blackburn’s biggest success came from Dack (£6.4m). The midfielder bagged 12 points for his goal and bonus. Diaz (£10.1m) also collected a good return. The striker hit nine points for his assist and bonus.

The away side came into the game as firm favourites but were held to a 1-1 draw. Blackpool midfielder Hamilton (£ 5.4m) returned nine points due to his assist and bonus, making him their highest scoring GAFFR player.

Sunderland had two players that picked up 10 points. One of them was star striker Stewart (£6.7m) who scored and picked up bonus. The other was defender Hume (£4m), he created the assist, secured a second half clean sheet and collected bonus.

It was tightly contested 1-1 draw between the sides. Bristol City’s highest scorer was striker Semenyo (£7.4) who scored and hit bonus to reach nine points. Teammate and midfielder Scott (£5.7m) was close behind with eight points for his assist and bonus.

The away sides strong form continued as they won 2-1 against strugglers Huddersfield. Huddersfield midfielder Holmes (5.5m) earned a strong 10 points due to his goal and bonus whilst fellow midfielder Rudoni (£5.5m) also hit a decent eight points for his assist and bonus.

Millwall dismantled Rotherham 3-0 which led to no Rotherham asset securing more than four points in GAFFR. Two players hit double-digits for Millwall. One of those players was striker Bradshaw (£6.4m) who bagged a whopping 16 points for his goals and bonus. The second player was midfielder Styles (£5.5m) who hit 10 points because he created an assist and earned bonus.

The home side fell apart towards the end of the game, losing to the visitors 3-1. Birmingham’s best GAFFR asset was midfielder Chong (£6.4m) who scored and hit bonus for his 10-point return. The biggest return of the match came from Middlesbrough midfielder Crooks (£6.4m) who bagged an incredible 20 points for his goals, assist and bonus.

Another successful asset was Middlesbrough striker Akpom (£6.3m). He scored and earned a bonus point to reach eight points to continue his top form.

Both sides were struggling for confidence coming into the game and that was telling. Watford crept a 1-0 win away from home. The Norwich assets failed to secure more than five points in GAFFR. There was three double-digit returns within the Watford squad this week.

Watford midfielder Sarr (£10.9m) hit 11 points for his assist and bonus. Teammate and striker Bayo (£8.4m) came off the bench to match Sarr after scoring and hitting bonus. Defender Gaspar (£5.7m) hit a big 10-point return for his clean sheets and bonus.

Stoke continued to struggle this season with their 1-0 loss to Preston. Although that was the case, two of their assets did still pick up seven points. Those assets were defenders Tymon (£5.5m) and Fox (£4.6m) after their first half clean sheet and bonus.

Two players hit significant GAFFR returns for Preston. Midfielder Browne (£5.6m) secured the biggest return of 11 points for his assist and bonus. The second highest earner was goalkeeper Woodman (£5.8m) who bagged 10 points for his clean sheets, save points and bonus.

It was another win for the away side as they continue to sustain dominance in the Championship. The league leaders came out on top with a 2-1 win. Midfielder Cooper (£5.7m) was Swansea’s biggest GAFFR returner with 10 points after his goal and bonus.

One of the biggest returns of the Gameweek came from Burnley defender Maatsen (£6.2m). The wing back hit a massive 18 points for scoring two goals, claiming a second half clean sheet and bonus. Teammate and midfielder Tella (£7.3m) hit collected nine points for his assist and bonus, he was the second highest scoring GAFFR player for Burnley this week.

The home side won 1-0 as they look to climb the table. No Reading asset managed more than four points in GAFFR. West Brom’s most successful asset this week was a joint effort. Midfielder Molumby (£5.4m) returned 11 points after his assist and bonus. Teammate and striker Dike (£9.3m) matched that after his goal and bonus.

Frustrating for some, West Brom midfielder Swift (9.7m) came off early a week after failing to start but still picked up a solid seven points for his bonus.

It was a huge week for the away side as they finished the game as 4-1 victors. Wigan’s most significant return came from midfielder McClean (£5.8m) who collected eight points from his assist and bonus. Hull had plenty of GAFFR returns but the biggest came from striker Smith (£4.9m) who came off the bench to bag a huge 15-point haul for his goals and bonus.

It was a tightly contested 1-1 draw between the clubs. QPR’s biggest return was a joint effort. Midfielder Chair (£8.3m) hit 11 points for his goal and bonus and his teammate and fellow midfielder Willock (£8.5m) matched that total after his assist and bonus.

Keep up to date with all of our GAFFR Championship Fantasy articles right here.