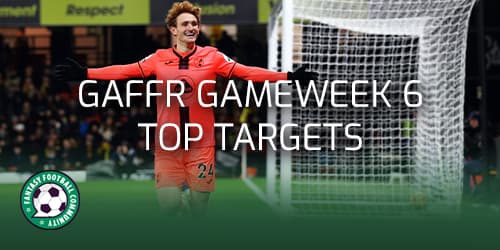 Taking a look at players and teams that could have the potential to have a great GAFFR gameweek 6 for GAFFR points. Looking at fixtures and both player and team performances in gameweek 5 to see if they showed us enough to be considered.

With gameweek 6 just around the corner it could be important for GAFFR managers to see which players and teams passed the eye test, had great stats in the previous game week or assets that have a great gameweek ahead in terms of fixture. This could help managers decide where they use their transfer or who they select for captaincies.

The £5.6m midfielder has already took an early price rise because of GAFFR performances. His 34 points has seen the attacker come in the top five highest scoring midfielders in the game. With two double digit hauls already and getting close to a third the Rotherham man scored three goals in the first five gameweeks.

Up next is Birmingham at home who have really struggled to gain any momentum at all this season. Failing to to win any of their games and keeping only one clean sheet in their first five matches could be enough to bring the great value budget enabler into those fantasy teams.

After a quiet gameweek 5 where the £9.6m forward blanked Weimann will be looking to return to his great early form. In the five league games he’s played so far the forward managed to return points in four of them. Those returns consisted of two goals and two assists.

Weimann remains near the top for GAFFR points in the striker bracket. In fact his 38 points can only be beaten by Sunderland striker Ross Stewart. Bristol City face Blackpool away in gameweek 6. Their inconsistent form is reflected in their results and after just conceding three to Burnley could be a team to target.

Tella comes to the Championship due to his loan spell from Southampton. The £7.1m midfielder has already noticeably took a price rise due to his recent performance. The attacker managed a massive 16 point haul in gameweek 5.

Tella’s double digit form resulted from his two goals and performance bonus points. His key stats were also impressive. He came away with nine passes in the final third, three shots and also missed a big chance so the midfielder could have come away with even more.

With a match against Wigan away in gameweek 6 Burnley will be looking to extend there one win from the season so far to two. Wigan are yet to lose a match in the Championship yet but that could change this week with the help of Nathan Tella.

Norwich started the season not meeting fans expectations but the good form seems to now be picking up. After managing back to back Championship wins its likely we see Norwich’s performances and results continue. Dean Smith decided to make drastic changes lately not starting key players Rashica and Pukki and Sargent seems to be the player benefitting from that.

The £7.7m forward has hit two price rises this season suggesting that GAFFR managers are flocking to the Norwich player. His three goals in the last two matches reflects a great period for Sargent. His gameweek 6 opponents Sunderland have not only conceded in four of their five matches but have conceded two or more in three of those same games.

After a questionable start to the season offensively the Baggies look like they could finally be clicking. West Brom managed to put five goals away against Hull who hadn’t conceded more than one goal in any of their early Championship matches.

7.6m Diangana stands out amongst fellow West Brom midfielders Swift and Wallace. The attacker is 10 GAFFR points clear of both which could come as a surprise to many, especially when considering the fact that Dianagana is just under £2m cheaper than the popular John Swift.

West Brom face Huddersfield in gameweek 6 who have lost three of their first four matches. They will be looking to carry on their scoring form and Diangana could be a cheap but effective way into that attack.

If you missed our latest edition of GAFFR gameweek 5 key takeaways you can catch up right here.