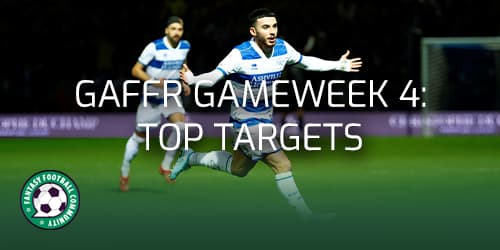 Taking a look at players and teams that could have the potential to have a great GAFFR gameweek 4 for GAFFR points. Looking at fixtures and both player and team performances in gameweek 3 to see if they showed us enough to be considered.

With gameweek 4 just around the corner it could be important for GAFFR managers to see which players and teams passed the eye test, had great stats in the previous game week or assets that have a great game week ahead in terms of fixture. This could help managers decide where they use their transfer or who they select for captaincies.

Blackburn have took the start of the season by storm winning their last four games in a row. Without dropping a single point so far this season Blackburn have surprised everyone. A large part of that has been contributed by premium GAFFR striker and £10m Brereton Diaz.

Brereton currently sits as one of the highest scoring GAFFR returners so far this season. His two goals and one assist has resulted in the forward hitting 30 points. With a game against Reading next, a team who just conceded four goals to newly promoted side Rotherham, he could have massive potential.

Chair became a go to GAFFR asset in the QPR team along with Willock last season. The Moroccan has started the season well. His goal and two assists in the first three fixtures means he’s averaged an attacking return in every match.

Currently on 26 GAFFR points the £8m midfielder faces Blackpool in gameweek 4. With only one win in their last four and goals conceded in their other three matches GAFFR managers may be tempted to bring him in this week.

The GAFFR favourite makes it in the top targets edition for the third time in a row. Currently the highest GAFFR points scorer in the game the striker seems essential for every manager out there. His three goals and one assist totals to 32 GAFFR points.

The £8.6m Bristol City took the league by storm last season and its looks like he’s bringing that form into the current campaign. They play Luton at home next. Their gameweek 4 opponents have failed to win a match this season and conceded in three of their four matches in all competitions. Weimann should now be heavily considered as a main captaincy option.

Although Middlesbrough have started shakily at the back Jones looks like he could have another good week in terms of GAFFR for gameweek 4. £6.5m defender Jones comes in the top five scoring defenders this season and that’s without a single clean sheet.

Jones has picked up a goal and an assist in the three matches he has played this season and the clean sheets could just be on the horizon. Middlesbrough play Stoke in gameweek 4. Stoke have played four matches in all competitions last season and failed to take anything from three of them. It could be another great week for Jones.

Rotherham have started their season better than many thought. Two wins in their three games in all competitions combined with a 4-0 smash and grab against Reading in gameweek 3 is enough to interest GAFFR managers.

Ogbene comes in at one of the best enabling prices in GAFFR. The £5.6m midfielder has struck the net in his last three consecutive matches for Rotherham. Although their gameweek 4 opponents have started the season well defensively his price could be hard to ignore.

With key gameweeks coming up in GAFFR you can check out our chip strategy article right here.