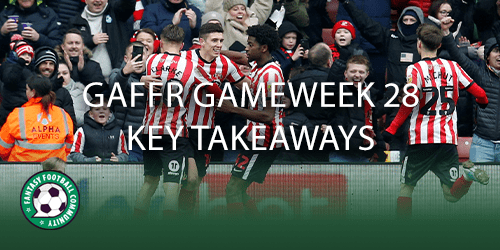 We take a look at the GAFFR Gameweek 28 key takeaways. We go through each and every game that played in the Championship in the most recent round. Taking into account clean sheets, assists, goals and bonus points we highlight the most successful assets in Gameweek 28.

Picking out the GAFFR Gameweek 28 key takeaways can give managers even more information to make those all-important decisions for the round ahead. Whether it be for transfer plans or captaincy, the key takeaways can very beneficial to fantasy managers.

The home side continued their great form with a 1-0 win over their opponent. No Hull asset managed to score more than five points in GAFFR. Sheffield United striker Jebbison (£6.1m) hit 11 points for his goal and bonus making him the highest scoring GAFFR player in this tie.

The Sheffield United backline had plenty of success as goalkeeper Foderingham (£6.5m) and defenders Egan (£6.1) and Lowe (£5.6m) all collected eight points for their clean sheets and bonus.

It was one of the biggest clashes in the week and one that the home side won 2-1. Midfielder Swift (£9.7m) was his teams biggest GAFFR success as he picked up 11 points for his assist and bonus. Two players hit double-digit hauls from Burnley.

It was a game full of goals as the away side won 4-2. Coventry midfielder Palmer (£5.6m) hit eight points due to his goal and bonus making him his sides best asset this week. Norwich were full of returns but the only double-digit haul came from midfielder Dowell (£7.3m) who bagged 15 points for his goal, assist and bonus.

The 2-1 away win may have appeared like a tight affair but Preston should have killed the game earlier. The biggest Birmingham return came from defender Colin (£4.7m) who picked up 10 points for his second half clean sheet, assist and bonus.

Preston midfielders Browne (£5.6m) and Ledson (£5m) both hit 10 points for their goals and bonus.

It was a tight game between Bristol City and Blackburn which ended 1-1. Bristol City striker Semenyo (£7.5m) bagged 11 points because of his goal and bonus whilst the biggest Blackburn return came from midfielders Dack (£6.4m) and Morton (£5.6m) who hit nine points for their goal and bonus and assist and bonus.

Cardiff slumped to another defeat as they lost to Millwall 1-0. No Cardiff player managed more than five GAFFR points this week. The biggest Millwall return came from defender Cooper (£6.1m) as he netted 11 points for his clean sheets and assist.

One of the biggest surprises of the Gameweek came between Stoke and Reading as the inconsistent home team dismantled their opponent 4-0. No Reading player managed to hit more than two points in GAFFR.

Stoke striker Campbell (£6.9m) brought in a huge 14 points for his goal, assist and bonus whilst defender Tymon (£5.5m) bagged 11 points for his clean sheets and assist. Striker Gayle (£8.3m) also made double-digits with his 10-point return due to his goal and bonus.

The match between Watford and Rotherham ended in a 1-1 draw. The only Watford player to hit more than five points was defender Ferreira (£5.5m) who took 13 points for his second half clean sheet, goal and bonus points.

Rotherham failed to have a player secure more than six points in this round.

Middlesbrough failed to continue their great run of form after losing 2-0 to Sunderland. Their big success came from goalkeeper Steffen (£6m) hit 10 points for his first half clean sheet, penalty save and bonus. Sunderland had three double-digit hauls this week.

Sunderland’s Roberts (£6.1m) bagged 11 points due to his assist and bonus whilst fellow midfielder Diallo (£6.2m) also hit 11 points because of his goal and bonus. Popular GAFFR asset and striker Steward collected a huge 12-point haul for his goal, penalty earned and bonus.

You can stay up to date with all of our most recent GAFFR articles right here.