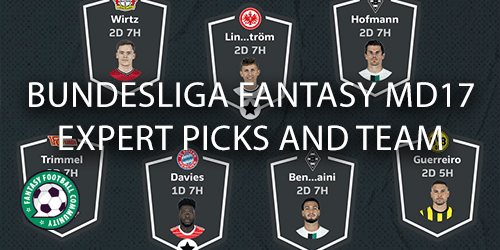 With a new round ahead, we look at the latest edition of Bundesliga Fantasy Matchday 17 expert picks and team. @FPLGunnersaurus (Jay) joins us to give his three top picks for the Matchday ahead. In addition, he also shares his squad going into the new round with his general thoughts.

Twitter is full of the most experienced fantasy football players around. Those managers can be some of the best people to look to when trying to gain clarity when making their own decisions within their teams. Checking out the Matchday 17 expert picks and team can help for the round ahead.

Keep an eye out ahead of the Matchday 17 5.30pm GMT deadline for the RB Leipzig line-up as they travel to rock bottom Schalke 04. Timo Werner (14.6m) is back from injury and could start. However, if Silva leads the line then he makes for a fantastic differential pick at only 1% owned.

Leipzig should be pleased with their draw at home to Bayern Munich last Friday, however they’ll be expecting to pick up a big win here. Silva has struggled for form lately and has never really been able to repeat his star displays at former club Frankfurt, despite glimpses with two double-digit fantasy returns this campaign.

A tie against bottom club Schalke might be exactly what the Portuguese forward needs to kickstart his season into gear and cement his place ahead of teammate Werner. Alternatively if Werner starts then it’s Timo time!

Another RB Leipzig player? When they face the team at the foot of the table (and host VfB Stuttgart in another standalone tie in Matchday 18), it just makes sense to stock up on their players. Szoboszlai, the Hungarian with a wand of a right foot, was in scintillating form before the winter break.

In six consecutive games he hit double digit fantasy returns, registering at least one assist in five of those matches. Being up in the first fixture of Matchday 17, Szoboszlai makes for a great first star midfield pick and if it all goes wrong then there should be plenty of options for you to move your star midfield pick. Having said that this is a game perfect for Szoboszlai to return big and for me he is an absolute MUST HAVE across the next few Matchdays, especially in the absence of the injured Christopher Nkunku.

To those who picked up Trimmel whilst he was on sale during Matchday 16, congratulations are in order! The Austrian right-back hit a huge 24 points in Union Berlin’s home tie against TSG Hoffenheim, picking up a couple of assists along the way.

Despite the arrival of Croatian right-back Josip Juranovic to challenge his starting berth, Trimmel is still tipped to start their midweek game away to SV Werder Bremen. Bremen are coming into this game off the back of a 7-1 away thrashing at the hands of FC Köln, which saw nearly half of Köln’s chances go down a heavily exposed right side. Where will Trimmel be galivanting up and down? That’s right, that exposed right side. If you didn’t pick him up on sale don’t fret! At 9.4m he still comes in relatively cheap and could be a great differential for you in the round ahead.

Catch up with all of our Fantasy Bundesliga articles in one place right here.