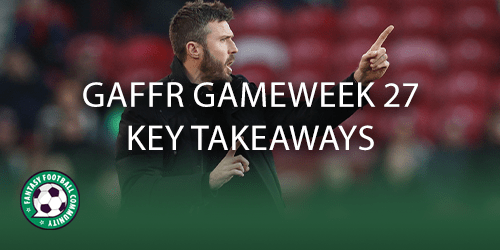 We take a look at the GAFFR Gameweek 27 key takeaways. We go through each and every game that played in the Championship in the most recent round. Taking into account clean sheets, assists, goals and bonus points we highlight the most successful assets in Gameweek 27.

It was a surprise win for the home side in their 4-0 dismantling of Blackburn. No Blackburn player managed more than four points in GAFFR. There was plenty of returns for Rotherham. Four of their assets reached double-digits this week.

The highest scoring player within the tie was Odoffin (£4.4m) The midfielder hit 12 points for his goal and bonus. Midfielders Barlaser (£5.7m) and Ferguson (£5m) both collected 11 points for their assist and bonus and goal and bonus.

There was a goal fest between Bristol City and Birmingham as the home side won 4-2. The highest scoring player from Birmingham was substitute Khadra (£6.7m). The midfielder scored and returned one bonus to hit seven points.

It was a tight affair between the sides as the home team came away with three points in their 1-0 win. None of the Coventry assets managed more than four points in the game. Burnley defender Beyer (£6.2m) hit a huge 14 points for his clean sheets and goal.

We saw another tight match between two teams and the game finished 1-1. Hull striker Estupiñán (£6.6m) collected 11 points for his goal and four bonus. Huddersfield’s biggest return came from Helik (£5.7m) who bagged 13 points due to his first half clean sheet, goal and bonus.

One of the games of the weekend came between these teams as the away side flipped the game on its head to win 3-2. Luton strikers Adebayo (£7.5m) and Morris (£7.4m) both secured seven points each for their goals and bonus.

West Brom had plenty of successful assets this week. The highest return came from defender Townsend (£6.7m). He picked up 11 points after scoring, keeping a second half clean sheet and earning bonus. Another big return came from midfielder Phillips (£6.5m) who bagged 10 points for his assist and bonus.

The home side squeezed a 1-0 victory here. Only one player hit more than four points in GAFFR from Millwall and that player was midfielder Flemming (£7.5m) who returned six points for his bonus. The biggest return in the Middlesbrough side came from striker Forss (£7.9m), hitting 11 points due to his goal and bonus.

There was plenty of returns amongst the Middlesbrough backline as Fry (£5.4m), Giles (£6.2m) and Smith (£5.4m) all bagged nine points each.

Preston were humbled in their 4-0 defeat this week. No Preston asset managed more than two points in GAFFR. Norwich’s biggest success was striker Pukki (£11.5m) who hit a whopping 19 points for his goals, assist and bonus.

Midfielder Dowell (£7.3m) also took a huge return of 16 points for his goals and bonus whilst teammate and defender Aarons (£6.6m) collected 14 points for his assist, clean sheets and bonus.

Both teams came away with a point in their 2-2 draw. Reading midfielder Hendrick (£5.2m) picked up his sides biggest return with 15 points because of his goals and bonus. The biggest QPR success came from midfielder Roberts (£6.3m), scoring two goals and earning bonus for his 16 points.

The home side continued their fantastic run this season with a 3-1 win over visitors Stoke. The biggest away return came midfielder Powell (£7.3m), hitting 10 points for his goal and bonus. Sheffield United defender Bogle (£6.2m) bagged a massive 17 points for his goals, clean sheet and bonus.

Swansea ran away as 3-1 winners in this match. Sunderland midfielder Neil (£5.6m) took the biggest return for his side with nine points due to his goal and bonus. Two Swansea players brought in 11 points. One of those players was defender Manning (£5.4m). His points consisted of a first half clean sheet, assist and bonus.

The other player to hit 11 points was midfielder Cooper (£5.8m) who scored and earned bonus.

The away side maintained their torrid run of form with a 2-0 defeat to Watford. No Blackpool asset managed more than four points in the game. The biggest GAFFR success came from Watford midfielder Sarr (£11m), he hit 10 points for his penalty scored and bonus.

Stay up to date with all of our most recent GAFFR Fantasy articles right here.