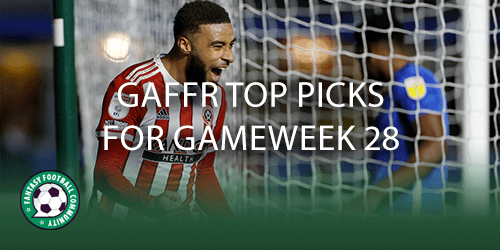 We go through the GAFFR top picks for Gameweek 28 using stats, form and fixture ahead. After an eventful Gameweek 27, we look ahead to the new round. Gameweek 28 starts on the 20th of January. This means managers have days to get their teams ready.

Going through the GAFFR top picks for Gameweek 28 can be hugely beneficial. As fantasy managers we are always looking for players who could do really well in the next round. For that reason, picking out some of the best assets for the Gameweek ahead can be detrimental to chase down the competition.

Things change very quickly in the Championship which can make it difficult to track short bursts of form. There has been an interesting change of path for both Bristol City and Blackburn as of late. Bristol were in a rough patch but they seem to be turning a corner as they are unbeaten in their last four matches in all competitions.

Bristol City face a Blackburn who have lost four of their last six matches whilst also conceding two or more goals in the same four games. The interesting switch in form from both sides and the short term form of Antoine Semenyo (£7.5m) could make him a good option. The striker has bagged a goal in each of his last three matches whilst also attracting a lot of attention from other clubs.

Coventry face a double Gameweek in Gameweek 28 so become a team highly investable for GAFFR managers. They play against Huddersfield and Norwich, two teams that have struggled to maintain any sort of consistency as of late.

Coventry will be hoping to correct their recent slump and start picking up some positive results. Many could be looking to star man Viktor Gyökeres (£8.2m). The Swedish striker sits as the second highest scoring player in his position whilst notching up 12 goals and one assist already this season.

Banking 12 clean sheets in the Championship, Coventry could be appealing at the back. They also play with a wingback system which allows their wingbacks to get into some of the most attacking positions on the pitch. One of those that could be considered is Jake Bidwell (5.7m) who also scored in one of his most recent matches.

Managers could also consider goalkeeper Ben Wilson (£4.6m). If looking to invest further in the attack, midfielder Gustavo Hamer (£6.2m) has picked up four goals and three assists this season and could be worth a shot.

Huddersfield have been woeful for the majority of the season and currently sit 22nd in the Championship. However, they play a double Gameweek in Gameweek 28 against Blackpool and Coventry. Although in poor form, Huddersfield have shown the ability to score goals recently, netting each of their last five matches.

Blackpool lay ahead in their first fixture, a team that have won just one of their last 10 matches. Huddersfield’s second fixture is against Coventry who have kept just one clean sheet in their last five matches, so the Huddersfield front line could be worthy investment.

Many managers could be looking at Jordan Rhodes (£5.9m). The Huddersfield striker has picked up five goals this season, with two of them coming in his last four Championship matches. Others could even consider midfielder Duane Holmes (£5.6m) who has scored two goals in his last three league games.

Sheffield United have been absolutely relentless this season, which is even more impressive because of how volatile form is in the Championship. Sitting in second place the Blades have won eight of their last 10 matches. They face Hull side who although have picked up results, are still struggling to convince in attack.

With a great defensive fixture ahead it could be wise to invest in a defence that has kept 10 clean sheets all season, especially because they play in a wingback system which allows their wingbacks to advance forward.

The player that should be considered is Jayden Bogle (£6.2m). The defender has spent some time on the bench lately but his two back-to-back starts suggest his minutes may be becoming more reliable. Bogle scored three goals in his last two games from wingback whilst also securing clean sheets. He has bags of potential for the round ahead so has to be considered amongst the top picks for Gameweek 28.

We have added even more GAFFR articles to our collection over the last few days, check them out right here.