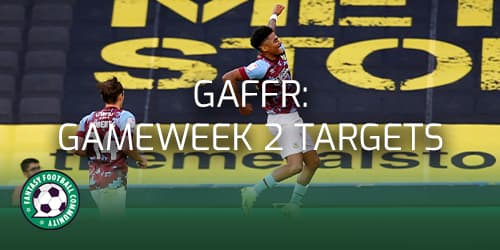 Taking a look at players and teams that could have the potential to have a great gameweek 2 for GAFFR points. Looking at fixtures and both player and team performances in the first gameweek to see if they showed us enough to be considered.

With gameweek 2 just around the corner it could be important for GAFFR managers to see which players and teams passed the eye test, had great stats in the previous game week or assets that have a great game week ahead in terms of fixture. This could help managers decide where they use their transfer or who they select for captaincies.

Although Bristol City lost their first match of the season against Hull there’s still plenty of positives to take away for GAFFR managers. The Bristol City forward scored 22 goals and created 10 assists last season. However there were question marks over if that form would continue this season.

£8.5m Weimann was for many an easy pick at the start of the new season. The forward didn’t disappoint. Although Bristol City lost they still managed 10 shots in the game. Weimann hit two shots on target and one key pass.

With a goal in his first game of the season the City striker took away a solid 10 points consisting of bonus points as well as the goal. With a home match against Sunderland it could be a great time to bring him in if you haven’t already or even captain him.

After securing a 1-0 win on the opening night against Huddersfield GAFFR players would have already been rewarded with the clean sheet. Ian Maatsen, new loan signing from Chelsea joined the line up and he did more than impress.

The Burnley left-back secured a whopping 15 points in the game consisting of a goal, clean sheet points and performance bonus points. The returns don’t tell the whole story though. Maatsen had two shots on target and even produced a staggering six key passes within the game.

With GAFFR points and stats that suggest it could have been more, non-owners will be looking to bring him in for the Luton at home in gameweek 2. Luton failed to hit the target against the shaky defence of Birmingham.

With an un-predictable first game away against newly promoted side Sunderland with all of their fans there it was tough to know how the game was going to go. £8m forward Viktor managed to score the only goal in the 1-1 draw.

Viktor came out on top in the forwards category in GAFFR this week with 11 points. The points consisted of a goal and performance bonus points. Although he only had one shot on goal he was clinical when the chance came as you can see below.

Ozan Tufan put in an all around great performance for Hull in their dramatic win against Bristol City. Looking fantastic throughout the match the £5.5m midfielder scored the equaliser with the penalty. It could have been more than the seven GAFFR points as Tufan hit the woodwork as well.

After putting in a very impressive attacking display with their 14 shots during the match Hull come up against Preston away next. Preston incredibly conceded 20 shots in gameweek 1 which could mean more goals for Tufan and Hull in game week 2.

The Swansea striker had a personal success season last campaign. Piroe scored 22 goals and created six assists for the Swans. Football fans debated between whether the £8.5m forward overperformed or that he’s just a quality finisher, either way he had a great season.

In gameweek 1 Piroe managed two shots on target against Rotheram but failed to find the net. In game week 2 Swansea face Blackpool at home who conceded 12 shots at home to a poor Reading side. With more opportunities the goals will come for Piroe.

If you want to catch up with the highest points scorers and key match events in GAFFR from game week 1, check out the GAFFR gameweek 1: Key takeaways article here.