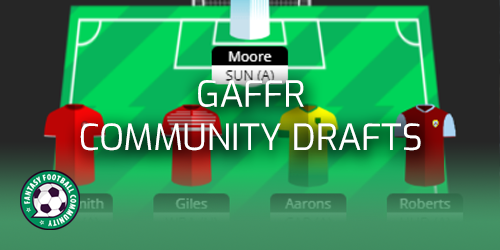 With GAFFR only days away from kick off we take a look at some of the Twitter communities drafts. We get the chance to see preferred formations, premiums picked, differentials selected and can even see some of the communities potential captaincies ahead of Friday.

Looking at the communities drafts can help give GAFFR managers an early indication of who the best players are, the most popular captaincy picks and could even indicate how owned some players are. All could be beneficial to how we start the season.

Louis has opted for a 4-3-3 formation which could be a popular one due to all of the value in defence and in the forward line last season. £6.5m Bradley Dack enables the likes of Pukki, Weimann and the defence and with a goal in his last match (at the time of writing) he could just well be great Blackburn cover for the early fixtures.

New West Brom signing and £9.5m midfielder John Swift leads the middle of the park and with his pre-season form looks like a popular asset for GAFFR this season.

@fpl_flair has opted for a Burnley double in defence which could be a great idea. When looking at the GAFFR fixture ticker we can see that Burnley play only three tough fixtures in the first eight matches.

GAFFR favourite Pukki doesn’t just make the team but similar to the last draft also takes the armband. The striker scored a whopping 26 goals last time out in the Championship so GAFFR players will be constantly looking to the Finland international for captaincy.

Bristol City’s Weimann takes another drafts forward spot with Pukki ,a new option we can see is Viktor of Coventry, the budget striker scored 17 goals last season so took a justified price increase to £8m.

GAFFR content creator @FFJoel has decided to go for a 3-4-3 structure which is different to what we have seen so far. Although regulars Weimann and Pukki make the draft article newcomer Swansea’s £7.5m 22 year old Obafemi takes the third forward slot.

The popular John Swift makes another draft where-as new Burnley signing and £8m midfielder Scott Twine makes the third GAFFR draft in a row. Signing from League one, scoring 20 goals and creating 13 assists could mean Twine is a popular pick to start the season with.

@StokeGaffr provides us with another draft for the upcoming season of GAFFR. Proving popular £6m wing-back from Middlesbrough Giles makes his third appearance in the article. With a goal under his belt already in pre-season the GAFFR favourite will be likely be in most teams out there.

Right back and £6.5m Max Aarons makes his second appearance with the Norwich defence becoming template. Norwich have some of the best early fixtures in GAFFR so many managers will be stocking up before game week 1.

Content creator and GAFFR thread maker @TomP_FF is also using the 4-3-3 formation. This does seem to be the template formation as it stands. Bree of Luton makes his first appearance. £6M Bree managed seven attacking returns last season so will be hoping to better that.

Swansea striker Piroe appears for the second time in a draft. The £8.5m forward bagged 22 goals last season and with goals in pre-season already GAFFR players will be looking to either bring him in or monitor him very closely.