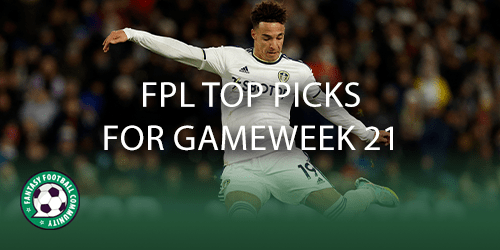 Utilising the fixture ticker and underlying stats from the Fantasy Football Scout members area, we pick out some of the FPL top picks for Gameweek 21. Considering team and player form, fixture difficulty and stats will help us shortlist some of the best assets for the round ahead.

Looking at the FPL top picks for Gameweek 21 can be extremely useful to managers in their quest for success. Knowing which players to target for the round ahead can help with important decisions like transfers and captaincy.

Note: At the time of writing, no double Gameweeks have been announced and all of the players included are officially fit.

Nottingham Forest have improved a lot over the last few Gameweeks, especially from a defensive point of view. The newly promoted side have kept three clean sheets in the last five matches in the Premier League. On top of that, amongst all teams in the league they rank the best team in the league for shots on target conceded.

There is huge potential for Nottingham Forest goalkeeper Wayne Hennessey (£3.9m) in the round ahead especially when considering their opponent. Amongst all teams in the last six matches they rank the worst for goal attempts and shots in the box.

Newcastle rank as the best team in the league for goals conceded and clean sheets kept, making them top of the pile in terms of their defensive strength. Most managers own one Newcastle defender (Kieran Trippier (£6m) so it could be worth doubling up at the back.

Crystal Palace lay ahead for Newcastle who have been struggling in front of goal as of late. In fact, in the last five matches they have failed to score in four of them. This gives managers a great opportunity to buy into Nick Pope (£5.4m) who sits as the highest scoring goalkeeper in the game currently. Because of this, Pope eases his way into the top picks for Gameweek 21.

Manchester City may be struggling to keep clean sheets lately but that could come to an end in the round ahead. Amongst all teams they rank the best for shots in the box conceded, total attempts on goal and the third best for shots on target conceded.

Wolves lay ahead for Manchester City, a team who have struggled in front of goal all season. In fact, Wolves have scored less goals than any other team. In addition, in the last six matches they rank the joint second worst for big chances total and joint second worst for shots on target. For those reasons, the inclusion of Ederson (£5.4m) could be a clever one.

We have already seen that Manchester City are conceding goals but their defensive stats suggest that they could keep a clean sheet in any given match. For that reason and the fact they have a double Gameweek ahead, it could be wise to invest in a member of their backline.

Manchester City manager Pep Guardiola has been rotating his team a lot recently. One player who has avoided the heavy rotation is Manuel Akanki (£5m). Akanji has failed to start just one match in the Premier League since Gameweek 8, making him one of their most reliable players in terms of minutes.

We have already covered the fact that Newcastle are the best defensive unit in the league this season. Because of this, buying into their defence could be seen as absolutely essential. This feeling could be shared in terms of owning Kieran Trippier (£6m).

At the time of writing Kieran Trippier sits as the highest scoring defender in the game, second amongst all players. In addition, the bonus point magnet ranks first for crosses, successful crosses, chances created and big chances created.

The Newcastle defence is that good, a double investment could be highly beneficial to FPL managers. In fact, at this point, most managers in the game own at least one Newcastle defender so in most cases, managers won’t gain much or any rank when Newcastle do keep a clean sheet, unless they have two defensive players.

For managers on a budget, Sven Botman (£4.5m) is one of best value assets in the game. He sits in the top 10 highest scoring defenders and has also hit five consecutive returns on the bounce. Sven Botman could be a fantastic short term and long term pick and for that reason, makes the top picks for Gameweek 21.

Tottenham may be struggling to keep clean sheets but their wingback system indicates that their wingbacks could be some of the most attacking defenders in the game. One of them that could be considered is Matt Doherty (£4.6m).

Before Manchester City, Matt Doherty has started the last four consecutive matches in the Premier League. This reinforces his expected minutes and reliability moving forward. Fulham lay ahead for Tottenham, who amongst all teams in the last six matches rank the second worst for shots in the box, total attempts conceded, big chances conceded and the worst for shots on target conceded.

Liverpool have been struggling defensively as of late but their recent Cup clean sheet could give them confidence at the back. We also have to take into account they play Chelsea in the round ahead, a team struggling themselves.

In fact, in the last six matches amongst all teams, Chelsea are the joint second worst for goals scored, indicating their poor conversion in front of goal. This could mean investing in Trent Alexander-Arnold this week a good move, especially when considering his attacking potential. In the last six matches amongst defenders he ranks third for chances created and second for big chances created. If Liverpool get it right, Trent could be a fantastic option this week and should be considered amongst the top picks for Gameweek 21.

Nottingham Forest’s form is on the up. The newly promoted side looked down in the dumps several weeks ago but they’ve picked up three wins in the last five matches, scoring in all but one. They face Bournemouth next, who amongst all teams in the league this season rank the worst for goals conceded and have also conceded two or more goals in four of their last five matches.

One of Nottingham Forest’s stand out players is Morgan Gibbs-White (£5.5m). Amongst all midfielders in the last six matches he ranks third for chances created and big chances created and ranks second for attempts on goal. He has the fixture and confidence from his 10-point haul in the previous match. Due to all of the above, Morgan Gibbs-White makes the top picks for Gameweek 21.

Manchester United continue to maintain some impressive attacking stats. In the last six matches amongst all teams the Reds rank second for big chances total and joint first for shots on target, making them one of the most investable attacks in the league as of late.

Marcus Rashford (£7.1m) may be facing Arsenal in what could be a hugely significant game but his form is very difficult to ignore. He has scored in each of his last seven consecutive matches before Crystal Palace, bagging four returns in his last four matches. Marcus Rashford is in fantastic form and simply has to be considered amongst the top picks for Gameweek 21.

Brighton are in free-scoring form as of late. In fact, no team has scored more than Brighton in the last six matches, making their attacking assets some of the most appealing in the game moving forward. One player who should be considered is Kaoru Mitoma (£5m).

The Japanese midfielder has been in top form since his return from the World Cup, where he also impressed with national team. Mitoma has picked up a return in each of his last three matches whilst also facing a Leicester side who are struggling to keep clean sheets so has to be included in the top picks for Gameweek 21.

Leeds are a team scoring plenty of goals recently and rank joint third for goals scored in the last six matches with 11. It is also very appealing that only Manchester City have had more shots in the box than Leeds in that same period.

Brentford lay ahead for Leeds, although bullish and beating some of the top teams, they are still conceding goals. In the last six matches they rank the worst in the league for shots conceded and the third worst for shots in the box conceded. Because of the above it could be worth investing in Rodrigo (£6.4m) who in the same period amongst midfielders ranks first for attempts on goal and joint first shots in the box and goals scored.

Amongst all teams this season Tottenham rank third for goals and shots on target, so the attacking line is definitely worth investment. They face Fulham who rank the worst team for shots on target conceded and big chances conceded.

One way into the Tottenham attack is Dejan Kulusevski (£7.9m). After suffering a recent injury, the Swedish winger appears to be back to full fitness. Kulusevski has already bagged one goal and five assists from his 11 matches this season and with a great fixture ahead has plenty of potential for Gameweek 21.

Manchester City may have suffered a recent slump in the results but they still rank first for goals scored, attempts on goal and big chances total. For that reason investing in the front line could prove vital. There is one standout option amongst the Manchester City attack.

Erling Haaland (£12.2m) has become a sensation in the Premier League this season. Amongst all players he ranks first for goals scored, expected goal involvement and big chances total. Excluding Haaland could be detrimental to rank.

Brentford’s impressive season continues. In fact they have beaten Liverpool and Manchester City in the last five matches. Amongst all teams in the league in the last six matches they rank second for goals scored behind Brighton.

One of the main contributors towards Brentford’s success is Ivan Toney (£7.5m). Amongst all players in the league this season he ranks third for goals and second for big chances total. He faces a Leeds side who rank the worst in the league for shots in the box and big chances conceded in the last six matches.

There is one player that stands out for Tottenham and that is of course, Harry Kane (£11.7m). Amongst all players this season he ranks second for goals scored, second for attempts on goal and second for shots in the box. Harry Kane has to be considered amongst the top picks for Gameweek 21.

Are you wildcarding this week? Check out the best wildcard team for Gameweek 21 right here.