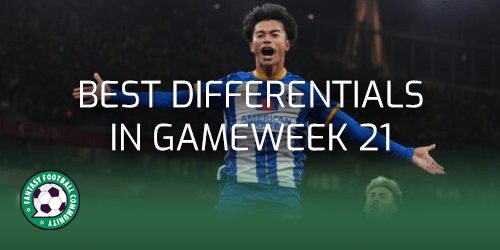 Our weekly look at interesting differentials – the FPL players with low ownership but the potential to be a superb pick.

We’ve all seen the template teams and have figured out which elite assets we’re going to jump on this season.

Whether you’re on the Kane train or the Haaland bus (or both), you’ll need some handy differentials to ensure you’re always one step ahead of mini-league rivals and can climb up the world rankings!

The £100m transfer of Jack Grealish to Man City is underwhelming so far but recent form has picked up. Thanks to three assists and a Manchester derby goal since Gameweek 17, he is now matching the six attacking returns of last season.

Furthermore, the last two actions were delivered in cameo appearances, meaning it could be his turn to start against Wolves.

Double Gameweek 23 is coming, so those without Kevin De Bruyne could punt on Grealish with several weeks in mind.

Since the Premier League has returned from the World Cup break, no team has scored more often than Brighton. 12 goals from four matches, three of which have involved Kaoru Mitoma.

Over 67,000 managers have already bought him this week, impressed by his exciting performances that certainly pass the ‘eye test’. It means that one price rise has occurred but £5.0m is still incredibly cheap for coverage of a free-flowing attacking side about to face Leicester, Bournemouth, Crystal Palace and Fulham.

Mitoma’s 1.6 per cent ownership now has an intriguing way to boost up the rankings.

Although Leeds are without a win since domestic action resumed, 19-year-old Wilfried Gnonto has enthralled many. Almost all minutes have been played, netting against West Ham and being robbed of his Gameweek 20 assist due to a slight touch from elsewhere.

As a £5.0m forward, he is both a great starting option for Leeds’ strong fixture run and allows managers to go 3-5-2 if they wish. It’s a move that encourages squad depth at such an awkward time.

What’s interesting is to see whether the club record signing Georginio Rutter or returning Luis Sinisterra affect his game time.