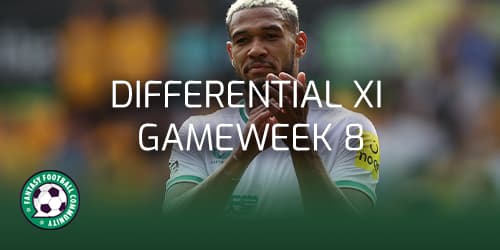 In this weekly series, Will from Fantasy Football 92 explores the low ownership differential options that could be the hidden gems to help you climb up those world rankings. He is his best differential XI for Gameweek 8.

Here is the best differential XI for Gameweek 8.

A trip to Nottingham Forest in a Gameweek containing only seven matches ensures Bernd Leno (£4.5m) is our stopper. Fulham give up plenty of chances but their hosts struggle in front of goal. It could be an interesting Friday encounter.

Centre-back Sven Botman (£4.4m) is adjusting well to life in England and a clean sheet against Crystal Palace could easily be followed up by another as Bournemouth visit the Toon. At a low price, he is a bargain.

Aston Villa’s Lucas Digne (£4.7m) is back to troll us fantasy managers once more, ahead of a nice match-up against Southampton, while Ryan Sessegnon (£4.5m) is one of our riskier picks.

The Spurs full-back has only started twice this season but has an attacking return from each occasion. Ivan Perisic completed 90 minutes in the Champions League on Tuesday, meaning Sessegnon could benefit from some rotation.

Despite his lack of goal involvements so far, Jarrod Bowen (£8.1m) looks to be the latest bandwagon ahead of West Ham’s upturn in fixtures. Bowen’s had a rotten start but is surely too good for this to continue and looks to be on penalty duty after scoring one in the Europa Conference League.

Teammate Pablo Fornals (£5.4m) also makes it into our XI as one of those sneaky picks that always seems to score when he’s not on anyone’s radar!

The Hammers take on Everton at Goodison Park, who will rely on Anthony Gordon (£5.5m) once more to provide the spark they so desperately need in their quest to stay in the Premier league. It’s the same for Jesse Lingard (£5.7m), who has failed to get going at Forest. A home encounter against Fulham can kickstart his Forest career ahead of the international break.

Meanwhile, the extremely low ownership option of Joelinton (£6.0m) completes the midfield. He’s had a superb start to the season and all that’s missing are attacking returns. He will be confident of changing that against a defensively suspect Bournemouth.

It looks like Ollie Watkins (£7.3m) continues to miss playing with Jack Grealish. It’s been another difficult start to his Premier League season which has seen his ownership fall but a home game versus Southampton is an ideal opportunity to get things going again in front of goal. With the World Cup nearing, there is still time to impress the England manager.

One man definitely on a flight to Qatar is Welsh wonder boy Brennan Johnson (£5.9m). He’s scored twice during his first six Premier League games and will be confident of notching a third, completing our duo of Nottingham Forest assets for Fulham.