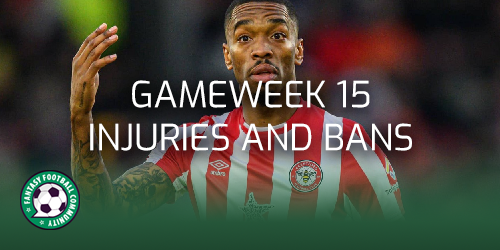 Being able to navigate around unavailable players is key to FPL success. Together with some useful Fantasy Football Scout information, here is the current list of injuries and bans heading into Gameweek 15.

THE NOTABLE INJURIES AND BANS OF GAMEWEEK 15

Bukayo Saka (knock) – Despite initially continuing, Saka was removed after 27 minutes of Gameweek 14.

Boubacar Kamara (knee) – Absent until after the World Cup.

Ivan Toney (suspended) – 5th yellow card of the season, out for Gameweek 15.

Kepa (foot) – Removed at half-time during the 4-1 defeat to Brighton.

Bobby De Cordova-Reid (suspension) – 5th yellow card of the season, out for Gameweek 15.

Luis Diaz (knee) – The Colombian will be out until December.

Kyle Walker (abdominal) – In a race to make the World Cup

Bruno Fernandes (suspension) – 5th yellow card of the season, out for Gameweek 15.

Joelinton (suspension) – 5th yellow card of the season, out for Gameweek 15.

Romeo Lavia (muscle) – Out since Gameweek 5 and back in training building match fitness.

Lucas Paqueta (shoulder) – No timeframe given by manager