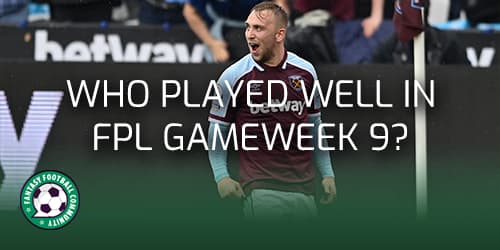 We answer the question, who played well in FPL Gameweek 9? We identify some key FPL assets that looked impressive in their eighth fixture of the season. With a focus on Saturdays matches that were shown live on Sky Sports and BT Sports.

Underlying stats will always be very useful for FPL managers in their chase for success. However, eye test has always been a huge factor when looking at potential FPL assets to bring into our fantasy teams.

Arsenal forward Gabriel Jesus (£8m) remains one of the of the most owned players in FPL. The Brazilain has now managed five returns in first eight matches this season. Many managers within the community sold the striker prior to the match against Spurs.

The Arsenal striker was rampant against their London rivals. His turn of pace caused serious issues for Tottenham. His overall positioning was fantastic and that was reflected in his three shots on target. Although he should have come away with more than just a goal, Jesus was fantastic. If his performance was anything to go buy, the in-form man could be worth holding onto.

Staying with Arsenal, midfielder Bukayo Saka (£7.8m) had high hopes from FPL managers at the start of the season. Although that was the case, many from the community decided to back his teammate Gabriel Martinelli instead. However, in his last eight matches he has still managed an impressive five returns.

Saka put in a fantastic shift in Gameweek 9. His power and drive to spin his opponents from the right side was evident. Showing the hunger to take on an opponent when he had the opportunity made him an exciting watch. His creativity was also a highlight. Saka created five key passes in the game along with a shot on target. Unfortunately, Saka was unable to convert his great display into FPL points.

Tottenham lost 3-1 in their Gameweek 9 match against Arsenal. Their main man and forward Harry Kane has now returned FPL points in every one of his last seven matches. Racking up 56 points, Kane is now the second highest for points in FPL amongst all players.

Against Arsenal Kane was a standout. Although he wasn’t as effective as he usually was offensively, he still had a great performance. The striker was fantastic holding up play for his side overall. He was always looking to cut the Arsenal defence open from deep with his brilliant passing ability. Kane scored a penalty and although it wasn’t from open play, he still managed two shots on target during the match.

Jarrod Bowen (£8.1m) highlighted himself as a fantastic FPL asset last season. After passing the 200-point mark there were high expectations from fans for the attacker. However, this season, prior to Gameweek 9, the West Ham ace had failed to pick up a single attacking return in the seven matches played.

Against Wolves this week we saw Bowen make his comeback. The English winger caused major problems for Wolves. Cutting in on his left foot in the final third has become trademark as of late. His pace and hunger to take on his man was also impressive. Bowen showed huge creativity and goal threat. Picking up three key passes and two shots on target, his performance was rewarded. He picked up 14 points for his goal, assist and three bonus points.

Did you miss out on the Arsenal v Tottenham match? You can catch up with all of the key moments and standout performances here.