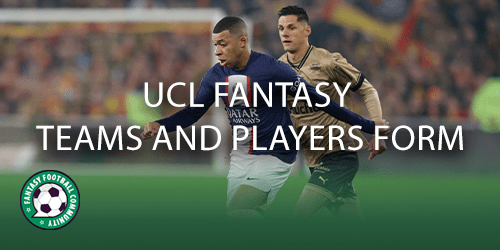 The round of the last 16 in the Champions League is approaching fast. For that reason, we take a look into UCL Fantasy teams and players form as most of the domestic leagues re-start after the winter World Cup.

Tottenham face Italian Champions AC Milan in the last round of 16. The Premier League side have really struggled to maintain any sort consistency since their return. In the two matches they have played so far, at the time of writing, they have lost one and drawn the other.

Their poor form is evident, but their defence looks even more concerning. Tottenham conceded two goals in each of the two matches already played. This could dampen the appeal of the likes of Ivan Perisic (£6m). Although poor, the English side have scored via striker Harry Kane (£10.5m) and midfielder Pierre-Emile Hojbjerg (£5.6m).

The French side face a tough match against German giants Bayern in the last 16. Since the restart PSG have won one match and lost one match. The game they lost was against second place Lens in their domestic league.

PSG managed to concede in both matches so it could be alarming if interested in the backline. They did score in both games however. The goals came from strikers Kylian Mbappe (£11.3m) and Hugo Ekitike (£4.8m), with defender Marquinos also netting. The only assist came from striker Neymar (£10m).

Similar to PSG, it has been a mixed restart to Chelsea’s campaign. They face Dortmund in the last 16. The Blues have won one and drawn one but against two newly promoted sides. They manged to keep a clean sheet in just one of their matches but scored three goals in the mean time.

Amongst their goals was midfielder Raheem Sterling (£9.5m) who scored scored and created an assist. Another player to shine was striker Kai Havertz (£8.9m) who matched his English teammate. Midfielder Mason Mount (£8m) also picked up a goal. Defender Reece James (£6.2m) also picked up another injury in the process.

The Portuguese side showed real quality in their push for the last 16 and Club Brugge lay ahead. Benfica have struggled since their return from the break. They have lost one and drawn one, failing to keep a clean sheet in any of their first two matches.

The only goal Benfica did score was finished by striker Goncalo Ramos (£9m) and created by fellow forward Rafa Silva (£8.m). It is quite concerning that Benfica were one of the best form teams in Europe before the break so they could be worth monitoring moving forward.

We already know that Club Brugge face Portuguese side Benfica. The Belgians have been impressive during their group stage qualification and there has been a significant recent change, that being a change of manager to former Bournemouth boss Scott Parker.

Club Brugge have played two matches since the restart, drawing one and losing one. In that same period, they have conceded five goals. They did however, score two goals. Those goals came from midfielder Noa Lang (£6.9m) and striker Ferran Jutgla (£5.9m).

Who are the best players in Champions League Fantasy so far this season? We take a look at the top five in our article here.