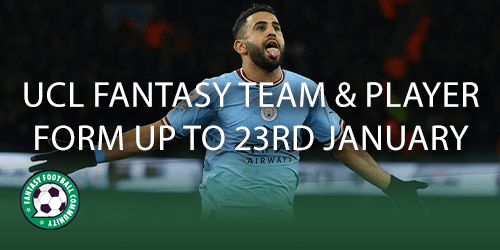 The round of the last 16 in the Champions League is approaching fast. For that reason, we take a look into UCL Fantasy team and player form up to January 23rd as most of the domestic leagues re-start after the winter World Cup.

Monitoring UCL Fantasy team and player form up to January 23rd can be very beneficial to managers. Managers have unlimited transfers to build their squads for the round ahead, so keeping an eye on teams and players form will be key when it comes making a draft.

It’s been a lengthy wait for the German side in terms of returning to football. Bayern face a tough PSG in the round of 16. They have played two matches, a friendly against Salzburg and a domestic league match against Leipzig.

Bayern are yet to secure a clean sheet since the restart but scored five goals in their first two matches back. UCL Fantasy favourite Leroy Sane (€9.3m) started both of their games along with fellow midfielders Jamal Musiala (€7m) and Serge Gnabry (€8.9m).

Leroy Sane picked up one goal whilst Striker Eric Maxim-Choupo-Moting (€6m) started the league game and scored via a Serge Gnabry assist to make it two draws in a row.

Dortmund face a tough match against English side Chelsea in the round of 16. It has been an explosive return to football for the German team as they have won all three of their matches whilst racking up a massive 15 goals, five per match on average.

Midfielder Jude Bellingham (€7.5m) was key to their success, picking up two goals and two assists. Striker Donyell Malen (€7.3m) also did well with his three goals. Striker Sebastian Haller also returned after his lengthy spell out. He scored three goals. Dortmund kept just one clean sheet out of the three matches they played.

Leipzig lay ahead for Manchester City who have been in mixed form in comparison to their usual standards. They have won four and lost two of their last six matches, keeping clean sheets in half of those. One player who has contributed towards their 13 goals is Erling Haaland (€11.1m), racking up three.

Another player worth considering is the in-form midfielder Riyad Mahrez (€9.8) who collected three goals and two assists, making him Manchester City’s most in-form attacker of the six matches. In the same period, popular defender Joao Cancelo (€6.7m) has worryingly started just three.

Real Madrid have played three matches since we last covered them. In that period they have lost one match and won two, the one they did lose being against Barcelona. The Spanish side kept just one clean sheet whilst also conceding five goals.

It wasn’t all bad for Real Madrid as they also scored six goals. Amongst the goals was striker Karim Benzema (€10.7m) who scored two. Brazilian midfielder Vincius Junior (€10m) also got on the scoresheet with his goal.

Napoli seem to be maintaining their strong league campaign. In their last three matches they have won two and drawn one. The game they did draw was their cup match which they eventually went onto lose against Cremonese on penalties.

UCL Fantasy favourite and midfielder Khvicha Kvaratskhelia (€5.9m) failed to start any of the last two matches but did start against Juventus. He scored a goal and created two assists to top off a huge performance. Also amongst the goals in that period was striker Victor Osimhen (€7.9m) who scored three goals and created one assist.

We will have lots of UCL Fantasy articles releasing as we draw closer to the round of 16, so you can keep tabs on all of our most recent articles right here.