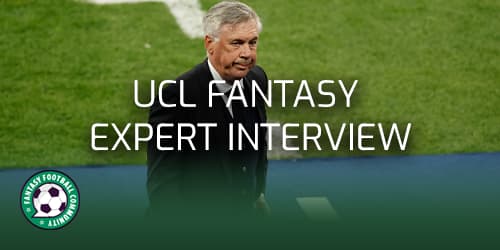 We take a look through a UCL Fantasy expert interview. Regular fantasy football manager and UCL Fantasy expert @FPLReaction shares some information about how he plays the game. Giving his insight into some of his person life, how he likes to play the game and some of the thought processes he takes when making decisions.

Looking at UCL Fantasy expert thinking can be really helpful. With so many UCL Fantasy players it could be very beneficial when learning how others play the game. This can then help improve our own games and bring clarity to the way we think about decisions.

A little about me

I am currently a fantasy football content creator, although I do this for a living it takes up a lot of my spare time too. I create a wide range of different types of content from games and threads to articles and hosting spaces on Twitter.

Why do you play UCL Fantasy?

Champions League Fantasy is the second largest fantasy football game in the UK and its growing season after season quite drastically. I have always enjoyed watching football outside of the Premier League and that has never stopped. Being able to select the best players in Europe in the toughest competition in the world has always been hugely appealing to me.

How much research do you do?

Too much! Although most of my research is picked up when creating my articles and preparing for Twitter spaces I watch a lot of football. As well as the Premier League I can watch between 10-20 hours of La Liga, Serie A, English Championship and several other leagues, sometimes because I just enjoy it.

It also helps having goal and assist notifications on for the top European teams matches constantly. My research can range between reading, watching football and looking at underlying stats.

How much football do watch on UCL Matchdays?

Too much again! I tend to make sure I have at least three screens available on any given matchday. The more I can watch the better the experience is for me. Being able to see what is going on in as many matches as possible has always made matchdays even more exciting.

How do you use Chips?

Champions League fantasy is a very quick and intense game. For that reason, I tend to take a very aggressive way of playing chips. For me, most of what managers gain in rank and points will be acquired during the early stages of the competition.

The best teams usually play their best players in the early matchdays, meaning there is less chance of rotation and a higher ceiling for points. As the Champions League progresses the stronger teams and players face better and tougher opposition. This means that the ceiling for potential points simply lowers and quite dramatically.

How do you use your transfers?

Most of the way my squad is built is based on players who I think have the potential of hitting 2+ attacking returns per match. My teams never seem to need much change because of the research I do, this means most of the time my transfers are used on tinkering or captaincy.

With limitless used, when will you activate wildcard and why?

My chip strategy has always been the same since before the season started. Use the limitless in Matchday 2 and Wildcard in Matchday 3. I now feel like i have seen enough Champions League to build a strong wildcard for the back-to-back fixtures ahead. Allowing myself two matchdays of information has been very useful to see which players could be good long-term picks.

You are currently second in the world, what is your rank target?

To win! The way I play can change depending on how realistic it is for me to win. What that means is if I think I am in reach of first place, I will go for it. However, if I believe it isn’t realistically possible, then I will aim for either the top 100, 500 or 1000. When that seems to be the case, I usually play it very safe in terms of owning well owned players to hold my rank if I’m happy where it is.

Have you got any advice for UCL Fantasy mangers?

Be aggressive. It is a very short game and for that reason how you use your chips can determine your rank at the end. Talking to people can be great but making decisions based on your own research, I have found to be very effective.

Stay up to date with all of our UCL Fantasy content here.