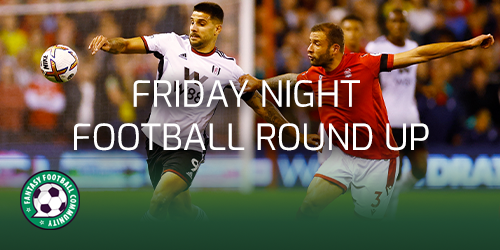 We take a look through the Friday night football round up. Gameweek 8 in FPL is now underway, and we look to the two early matches played. We take a look at the line-ups, key events, and the standout FPL performances from the Aston Villa v Southampton and Nottingham Forest matches.

Looking at the Friday night football round up can be very helpful to FPL managers. Taking note of the line-ups and which players came out on top in FPL can help the community with their future decisions regarding those teams and players.

FPL managers could be looking to £4.7m Digne. The defender has become a top target for wildcarders this week and for that reason many will have high hopes for defender.

With only one tough fixture in the next seven matches, FPL managers could be looking at the Saints assets. One of those players could be £6.5m midfielder Ward-Prowse. The set piece taker has only picked up two attacking returns this season, and many will hope that improves.

The 27% owned £4.1m Neco Williams starts. The defender resides on many managers benches every gameweek. However, some could have seen potential to start him in this match.

FPL managers will be looking forward to the performances of £6.9m striker Mitrovic and £4.6m midfielder Andreas. Both players are well owned and many even brought in the Serbian striker for his great fixtures ahead.

To stay up to date with all of our FPL articles you can find them all in one place here.